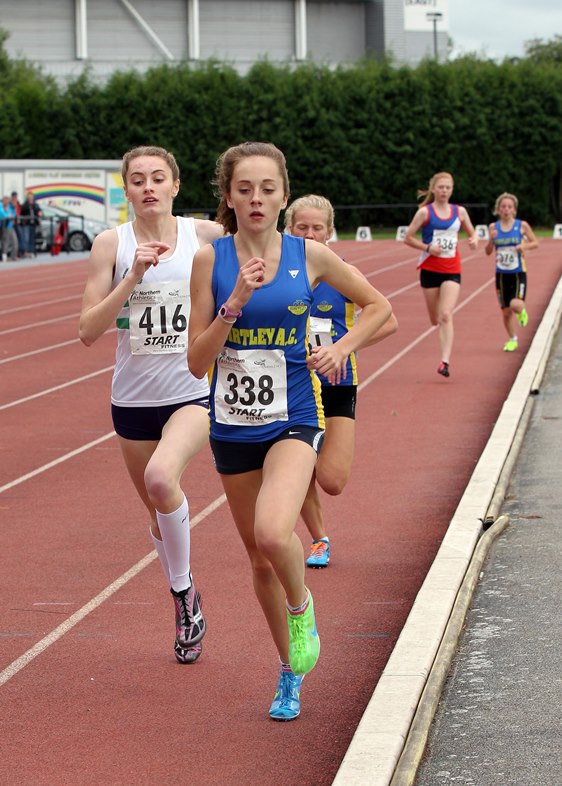 Ollie Stevenson of Kingston upon Hull picked up a two titles on day 2, winning both the under 15 girls hammer and discus in a short space of time. This was which quite an achievement as both events overlapped. The hammer was won with a throw of 47.21 giving her a comfortable victory she them claimed the discus crown with a throw 32.44 in a much tighter competition..

Niamh Emerson of Amber Vally AC added the 800m title to the 300m hurdles title she won on Saturday, an impressive and unusual double that not many athletes tackle. Sophie Tarver of Wirral AC also picked up medals on both days claiming double silver in the 800m on Saturday then doing the same in 1,500m on Sunday.

Meghan Sander Leeds City AC was perhaps the busiest of any of the athletes at these championships, she won gold in the under 15 girls shot, silver in both the javelin and long jump as well as competing in the 75m hurdles

Twin sisters Alica and Ella Barrett of Chesterfield (under17) had a very successful weekend collecting a total of three gold medals and one cpb. Ella collected gold in the 200 and 300m, while Alicia equalled the cbp of 11.10 in 80m hurdles set by another Chesterfield athlete Liz Fairs in 1993.

Kelly Chadwick of Sale and Emily Strickland Scunthorpe brought out the best in each other in two tightly contested under 15 sprint finals. Emily Strickland took the 200m first pushing Kelly into second place by a very close 25.78 to Kelly’s 25.80. However in the last track event of the day Kelly gained her revenge taking the 100m in 12.05 to Emily’s 12.38

The most impressive performance of day 2 came near the end of the competition when George Armstrong of Leeds City the reigning champion in the under 17 men discus not only retained his title he also set a new cbp with a throw of 57.02 beating the previous cpb set Carl Myerscough in 1996. George now has the cbp for the discus at both under 15 and 17

Photos David T. Hewitson/Sports for All