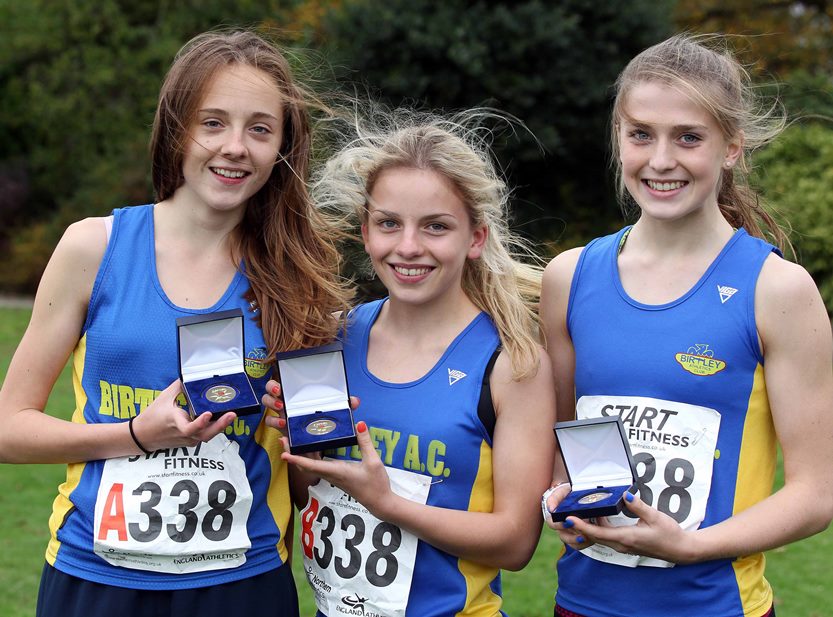 The 5th running of the event took place at Graves Park Sheffield on the 18th October, and again proved popular with both athletes and spectators.
Over 920 athletes took part, and there were 237 complete teams across the age group races; however this is a good event and deserves to be better supported by Northern clubs

The first two races are for U17s; the reason being so that the Under 11 athletes – who may never have competed before, let alone run a relay event – can watch the takeover process in action before running themselves.In the first race the team from Birtley were convincing winners, with Kate Waugh & Sophie Burnett posting the 2 fastest times in their race..

In the U17 men’s race, winners City of York were in 8th place after leg 1, but only 14 seconds behind the leg leader Jonathan Shields from City of Sheffield. Josh Schofield gained 7 places to give the York team a 13 seconds lead after leg 2. With Ben Lewis on the 3rd leg for York, and James Gormley out for City of Sheffield, it was always going to be close; Ben held on to a 6 second lead, with James recording the days fastest time of 7:06.
The U11 and U13 races saw the spectators out in force in the finish changeover area creating a great atmosphere.

The u11 girls race saw all the medals go to Lancashire clubs with Sale Harriers first, Warrington 2nd and Salford 3rd. In the boys race Gateshead Harriers justified the journey down to Sheffield beating the Salford team by 10 seconds. City of Sheffield were 3rd.

The U13 races provided the biggest young athlete fields, with 33 (41 first leg runners!) girls teams and 29 boys teams competing. The number of athletes in the changeover area certainly kept the officials busy, but all went well.The U13 girls race was the closest of the day with winners Liverpool Harriers 1 second ahead of Keighley & Craven, who in turn were 1 second ahead of 3rd place Manchester Harriers. The boys race was not so tight with Warrington finishing 12 seconds ahead of the Leeds City team. Unfortunately one of the Leeds athletes was not eligible to run for the club until the 1st of November, making Hallamshire the second placed team with City of York 3rd.

The U15 girls race saw City of Sheffield win by 24 seconds, form Liverpool Harriers with Manchester Harriers 3rd. City of Sheffield again showed how strong the club is in this age group by winning from Vale Royal, and their B team finishing 3rd. The Northern competition does not award medals to B teams (Although we are to reconsider this policy for future repeats of the event), so Liverpool Harriers got the bronze medals.

The women’s race swa a repeat of the 1st leg in 2013 with Rosie Smith (Durham) leading, this year 10 seconds ahead of Katie Walshaw of Holmfirth. Rotherham were in 3rd and 4th place 20 seconds back. On leg 2 Lydia Turner gained 15 places to move Birtley up to 3rd and record the days fastest time. Holmfirthe ere leading with Rotherham 2nd. All was to change on leg 3, with Robyn Lanceley taking Rotherhams A team ahead of Holmfirth, and Laura Spence bringing the B team up to 3rd place. 5 of the 10 fastest times were posted by Rotherham athletes. Lincoln Wellington were awarded the bronze medals.

The final event – the Cutlers relay – for teams of 4 runners, saw an increased number of teams competing over previous years, (& lets hope this trend continues) saw 39 runners set off.Joe Steward (East Cheshire) who finished 2nd representing the North in the Home countries International at Wollaton Park last year, led the runners home recording the second fastest time (10:17), 3 seconds ahead of Elliot Bowker for Vale Royal.At the end of stage 1 Liverpool were in 14th position. Leg 2 ended with Liverpool ahead, through a good leg by Daniel Jarvis. Liverpol extended their lead over legs 3 and 4, with Warrington just holding on to 2nd, just 1 second ahead of Vale Royal, and Andy Heyes – running the days fastest time of 10:04 – to bring Hallamshire Harriers into 4th one second behind Vale Royal. Results