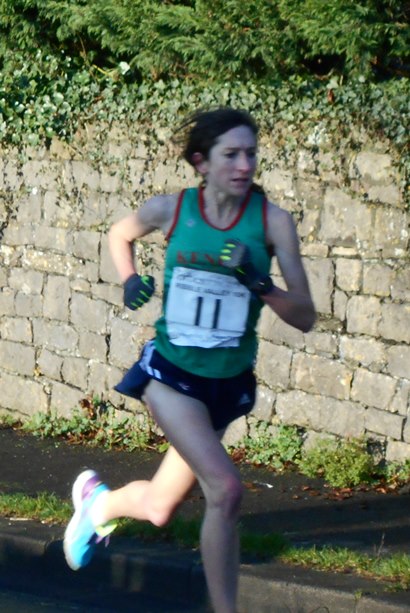 The superb Ribble Valley 10k road race reached its entry limit of 1500 entries, a first for the event which has been confirmed as host the Northern Athletics championship 2015 10k road running championships. The cold and clear morning was in sharp contrast to last year’s dull and cloudy conditions, as the athletes were away promptly at 10-30.

N/A 10k Women’s race
The elite women athletes being of a similar standard, a competitive race was very much expected. However nobody mentioned that to Kendal’s Rebecca Robinson as she finished the race exactly as she started, at the front. A fine display of powerful running she came home in a time of 33.55  and was never headed finishing 105seconds ahead of  the second athlete Abbey Runners Heather Sellars,  Richmond & Zetland  Shona Fletcher was a further 8 seconds adrift of her with Lorna Young of  Heaton Harriers in 4th and Leigh’s exciting prospect Laura Riches delighting her watching mum and dad with 5th place in 36.43.

In the team race the Gold medals went to host club Blackburn, Silver to Trawden. and a well deserved Bronze team medal going  to the delighted women of Accrington Road Runners

It is no coincidence that when Leeds City turn up at a championship (and they usually attend all of them) they always stop for the presentation, this is a fine example to other clubs. Leeds and their team manager Simon Deakin, once again did not disappoint as they collected 2 individual medals and the team gold medal.
Derek Hawkins Leeds City was crowned Northern Athletics champion  for 2014 with a time of 30.06, his Leeds teammate and manager Simon Deakin  22 seconds behind. In 3rd places and collecting the bronze was Russ Best from New Marske Harriers in the North East.
The other 2 team medals went to host club Blackburn Harriers, bronze and Sale Harriers Manchester picking up the silver medal
Individual