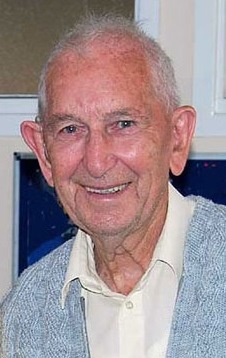 We are sad to report the death of Ernie Slaughter,  a past President and former Secretary of our club.  He was just short of his 87th birthday.

Ernie joined Morpeth Harriers in 1947, shortly after its formation,  and soon made an impact as one of the North East ‘s leading cross country runners.  He was third in the North Eastern Junior Championships in the 1947/8 season and improved to second place the following year. In his first year as a Senior Ernie took the silver medal in the North Eastern and followed that with a bronze (’52/3), silver (’53/4) and bronze (’54/5).

Whilst still competing regularly, Ernie was elected Secretary of the club in 1958, a post he held until 1975.  He became President of Morpeth Harriers in 1989 until stepping down from the position in 2008. Throughout this period Ernie also contributed to the sport in the  North East as a technical official, regularly judging at cross country events, road races and track and field meetings whatever the weather.  Well-respected for his firm but fair approach,
Ernie served as President of the North Eastern Counties Cross Country Association from  1989 to 1991.

Even in his  eighties Ernie continued to take a close interest in the Harriers, regularly attending club events and as recently as May he came along to our Senior Northern League match at the Morpeth track to formally hand over the timekeepers’ stand, to whose cost he had made a major contribution.

Many generations of Morpeth Harriers owe a huge debt of gratitude to Ernie, not only for the ever present words of encouragement but also for his work behind the scenes.

A genuinely nice man and a great enthusiast for the sport, he’ll be sadly missed.  Our sympathies go to Ruth and the rest of Ernie’s family.

All friends are kindly invited to attend, No Flowers Please by Request of Ernie’s Family. A collection will be held at the Service in Memory of Ernie.