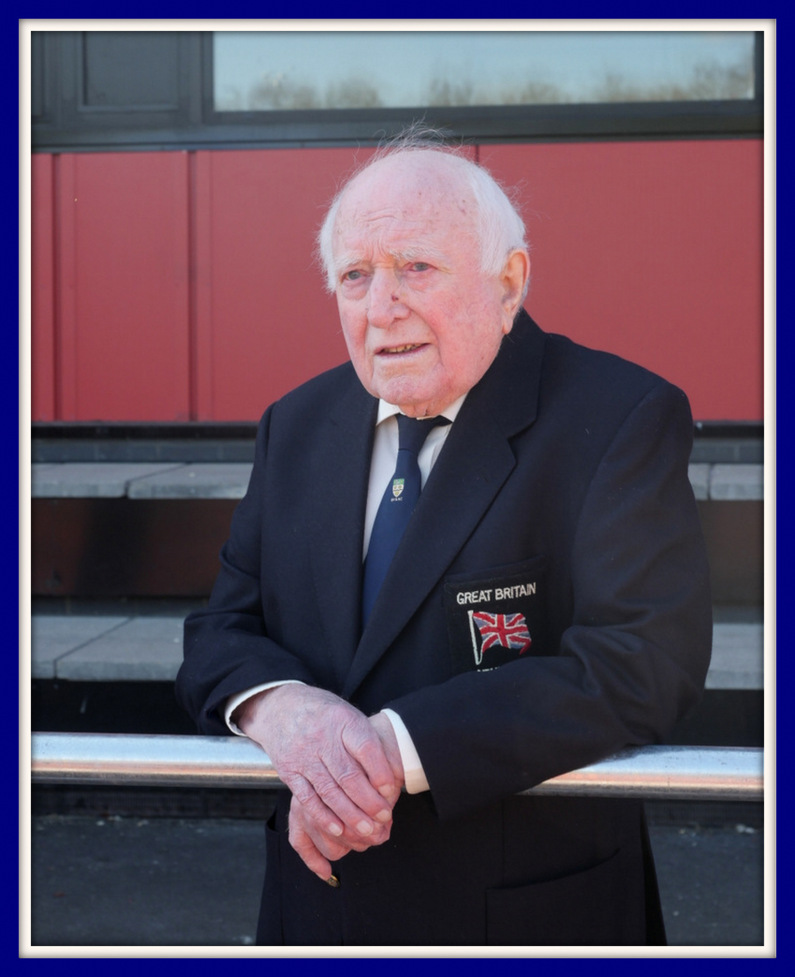 Blackburn Harriers & AC are deeply saddened to report the death on Thursday 8th November 2018 of George Kirby aged 95. It would not be an over estimation of George to say that he, more than anyone, had more influence on the sport of athletics in the Lancashire area and beyond than almost anybody since the end of the Second World War.

Having served in the RAF as a bomber pilot George returned to teaching in the Blackburn area and very soon became involved in the resurgence of Blackburn Harriers after the war. He enthusiastically argued for the laying of the athletics track at Witton Park which was opened in 1958 and in the following 60 years became an integral part of everything that was Blackburn Harriers as President, Chairman, coach and official.
During that time he graduated into regional and then national athletics. He became a senior AAA coach and Grade 1 Judge and was an international field events official and referee. In 1975 he was appointed coach to the Great Britain Athletics Team in addition to being a AAA Northern Staff coach for the discus. He was frequently seen on television both as a judge and an official at international, European and national championships.
In the 1960’s he was instrumental in arranging extremely popular invitation events at Witton Park to which many international athletes came, including Derek Ibbotson, Bruce Tulloh, Ron Hill, Barrie Kelly, Dorothy Hyman and Mary Peters. He ensured that Witton Park became the venue for Northern Cross Country Championships, National Women’s Cross Country Championships and the Women’s International Cross Country Championships.
George held numerous offices in the British Athletics League and was one of the founder members who set up the league being official’s secretary for many years. He was an athletics correspondent for the Lancashire Evening Telegraph for more than a quarter of a century and was the person to go to if any information on the history of local athletics or national athletics was needed.
He remained actively interested in athletics right up to the end of his life, including this year attending a Northern League fixture at Witton Park. He had been President of the Club for many years, President of Lancashire Athletic Association as well as being Chairman of the Northern Counties Officials Association. He was particularly proud to see the club have three Olympians in 2012 and 2016 including a bronze medal in Rio for Sophie Hitchon in one of his favourite events.
The Club and athletics in general were blessed when George came along all those years ago to play a part in our sport and in particular to put all his energies into ensuring it was enjoyed by so many people over so many years. He will be sadly missed and our thoughts go to his wife Marion and his family at this sad time.
Funeral Details
Blackburn Cathedral on Friday 23 November at 2pm, followed by a cremation at Pleasington Crem at 3pm with refreshments to follow.

Family flowers only- with donations to East Lancs Hospice. I have fuller details if anyone would like them