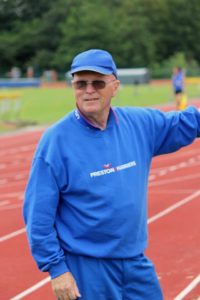 Preston Harriers were recently shocked and saddened to hear of the death of Club Secretary, coach and stalwart of almost 40 years, Bob Welfare, after a short illness.

Bob was born in the South East of England, but at the age of 11 his parents moved for work and settled at Goosnargh.  He was not sportingly inclined in his youth, but after starting with Longridge Striders he found himself joining Preston Harriers in November 1981.  At an early AGM he asked who was looking after the junior section, and promptly found that he had a job!

The Club had seen intermittent success during the 1970s, with small numbers, but by the end of the 80s his efforts had doubled the membership and encouraged others to become coaches.  He established training groups for youngsters, as well as sprints and middle distance groups, held medal meetings at London Road track, and successfully encouraged all Preston Schools to take part.  Even during the period when he re-trained as a Teacher and had to lessen activities for a couple of years, he was still keenly involved in Cross Country and never missed a Mid Lancs League event for years.

After re-training was completed, he once again became heavily involved, and also took responsibilities with the Lancashire Schools AA, in particular promoting Combined Events teams which he and his wife Angela managed at Regional and National finals.   Bob’s strengths were in getting others involved, as Coaches and Officials, and in encouraging youngsters to try new events.  He managed teams in the Northern Womens T&F League for many years of promotions, so that the Club was well prepared for the joint teams which are now the norm.  By the time the new track at Cottam came into being at the millennium, numbers had doubled yet again to around 300.

In the new environment Bob continued to recruit members and the coaches to look after them.  He helped lead the Young Athletes team to the Premier Division but still wasn’t satisfied.  Having coached jumps and track he identified weaknesses in the throwing events so trained to become a Javelin coach and, in more recent years, a Hammer coach.  In that role he coached athletes to a series of English Schools medals, with Gold achieved in his final season.   He also saw the benefits of Sportshall athletics, and campaigned hard to ensure the survival of the Lancashire County Sportshall League and encourage others to take it forward.

Bob has held numerous positions within the Club and the wider athletic community, always striving to improve the organisation and create more opportunities for athletes.   Even those who disagreed with him on an issue felt they were wiser for having met and listened to him.  A large number of athletes in Club and County have reason to be grateful for his non-stop efforts over a long period of time.

During the last few weeks of his life, when he knew how serious his illness was, he still invited people to his hospital bed to discuss aspects of Club organisation and performances, and to pass on the strength to maintain their respective roles in the future development of the Club.   He was a dedicated enthusiast, held in high regard and great affection by all who knew him well.   No expression of how greatly he will be missed can do him justice.