A short tribute to recently deceased Manchester distance legend Ricky Wilde by his friend and teammate Jim Jones (pictured handing over to Rick in the Manchester 4 x 2 Mile relay in 1977. 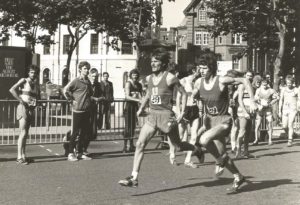 Rick was an enigma in the Athletics World. He was modest, unassuming and didn’t talk about his achievements. He won so many races .He could run on any surface and over any distance.
In 1970, he was called up to be a late replacement for Ian Stewart to run in the 3000m at the European Indoor Championships in Vienna, where he broke the World Record in 7.46.85.

After that he disappeared internationally because he didn’t want the pressure.

He still holds records on the Fells, notably Lantern Pike, which still stands after 42 years. He won the Snowdon Fell Race in 1977. He won the Harden Moss Fell race and later that day won the Great Hill Race.

It was a privilege to have known him, raced and trained with him and be regarded as one of his many friends.  RIP Rick
Jim Jones 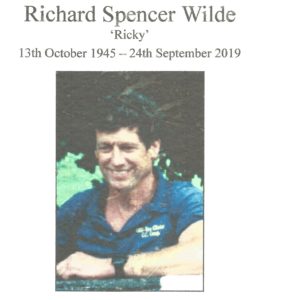