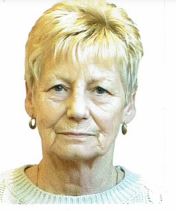 After a long battle with illness which physicians were unable to fully diagnose unfortunately Diedre passed away last Saturday.

Diedre joined Barton & District A.C. as a schoolgirl and continued her involvement with the club through her children Michael and Rachel and, subsequently, Rachel’s son Nick and daughter Emily.

Diedrie married her childhood sweetheart Brian, (known as Bruce). She was always cheerful and helpful to others in Barton. Despite her ill health in the last couple of years she continued to take elderly friends for hospital visits and cooked an evening meal for one of them on an almost daily basis. She was a pocket dynamo liked by all who knew her.

Seeing her children compete Diedre took to distance running and took part in a number of marathon and half marathons including the London Marathon and the Great North Run. She trained as a field judge in preparation for the last time the English Schools Championships were held in Hull. Alongside her the club also trained Jeanette Murray, Julia Stephens and the late Dave Harris. All four reaching the highest levels of officiating as field judges.

Diedre was someone who could always be relied upon being a thoroughly competent official who was invariably the field referee. She enjoyed officiating and meeting people whether they be officials or athletes – she was always pleasant, fair and encouraging. at which she was Officiating at one major meeting an athlete, just embarking on his international career, came up to her to say that seeing that she was officiating in his event gave him confidence and had a calming effect to his nerves. Her officiating knew no bounds – she was a people person and officiated at all levels – domestic, county, international, schools and disability. Though she had said that this would be her last season, and only a matter of weeks ago said that she had finished officiating altogether, she went to Cleckheaton and officiated for her club only a fortnight ago.

We have lost not just a colleague, a mentor, and enthusiast but a true friend.

All in Humber Athletics are deeply sorry to hear that Diedre Clayton of Barton Athletics Club and Humber County Athletics Association has passed away.

Diedre was totally committed to the Sport of Athletics and to the development and support of Athletics in the region of Humber.  She was a conscientious  Official of High Grade and in this capacity she mentored, trained and encouraged many young officials, starting out on their career.

Diedre would be the first to say however that one of her great loves was working at grassroots level where she found so much pleasure watching and helping young people enjoying themselves in our Sport.  She was devoted to her club, Barton upon Humber AC. and so happy to be with them in all their events from local SportsHall to League and County Matches and to their well-known Cross-Country.

Her many friends will miss her greatly as one who helped all and who travelled long distances in the name of Athletics, as well as being a tireless worker for her County, often battling against ill-health to do so.

Her Club is thriving in the Athletics Community at this time and this stands in tribute to the wonderful contribution Diedre has made.