Although I have never been an athlete, I have always been very competitive and took part in many other areas of sport in my youth!

I became involved in athletics thirty five years ago when my eldest daughter dragged me along to training, firstly at 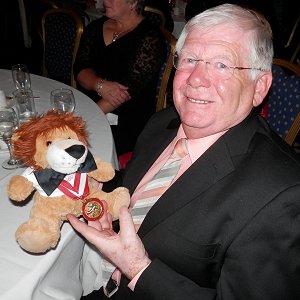 Wombwell SAC then later the Dorothy Hyman Track Club which evolved into Barnsley AC. Josie left athletics many years ago but I was hooked and, along with my wife Maureen became deeply involved in the sport.

My initial involvement was as a parent helper but that soon led to qualifying as a Field official, a role that I have always loved and I have been lucky enough to have officiated at Olympic and Commonwealth level and many other international events in addition to all levels of domestic competition. Eventually my interest in the politics of the sport was raised when, very early on in my athletic career I was elected to the Track and Field committee of the North of England AA, the then governing body in the North. With the fall of the BAF in 1997 and the demise of the AAA of England the new England Athletics was formed and took over governance of the sport and the NoEAA reinvented itself as a competition body and reformed as Northern Athletics which was developed by a group of which I was a member, and I have remained on the Executive Board of NA ever since as one of the two Track & Field representatives and the T&F Championship Secretary. As a member of the NA Board (and previously North of England AA Management Committee) I have knowledge and experience of the negotiations with England Athletics with regard to the future funding of Area competition and believe I can contribute to the eventual resolution of this matter which has dragged on for far too long. These are important and interesting times for Northern Athletics and I believe I can influence them.

In addition to officiating and my NA duties I am also Chair of both the Yorkshire AAA, Yorkshire & Humber Regional Council and Barnsley AC. I also spent a very enjoyable year as President of Northern Athletics during which time meeting athletes from around the region and hearing their views was the highlight of the year.

In all of my years in athletics and the various posts that I have been lucky enough to hold my primary concern has always been to do my best for athletes and I think that I have achieved this.

If I am elected Chair of Northern Athletics then I will continue to work for Northern athletes by striving to ensure that a resolution is reached which will guarantee the future of Area competition which, I believe, is a vital step on the ladder for athletes, officials and team managers. By re-establishing a proper pathway of club, county, area and national competition we can help everyone in all areas of the sport achieve their full potential, whether that be international recognition or representing their club in a local league or all levels in between.