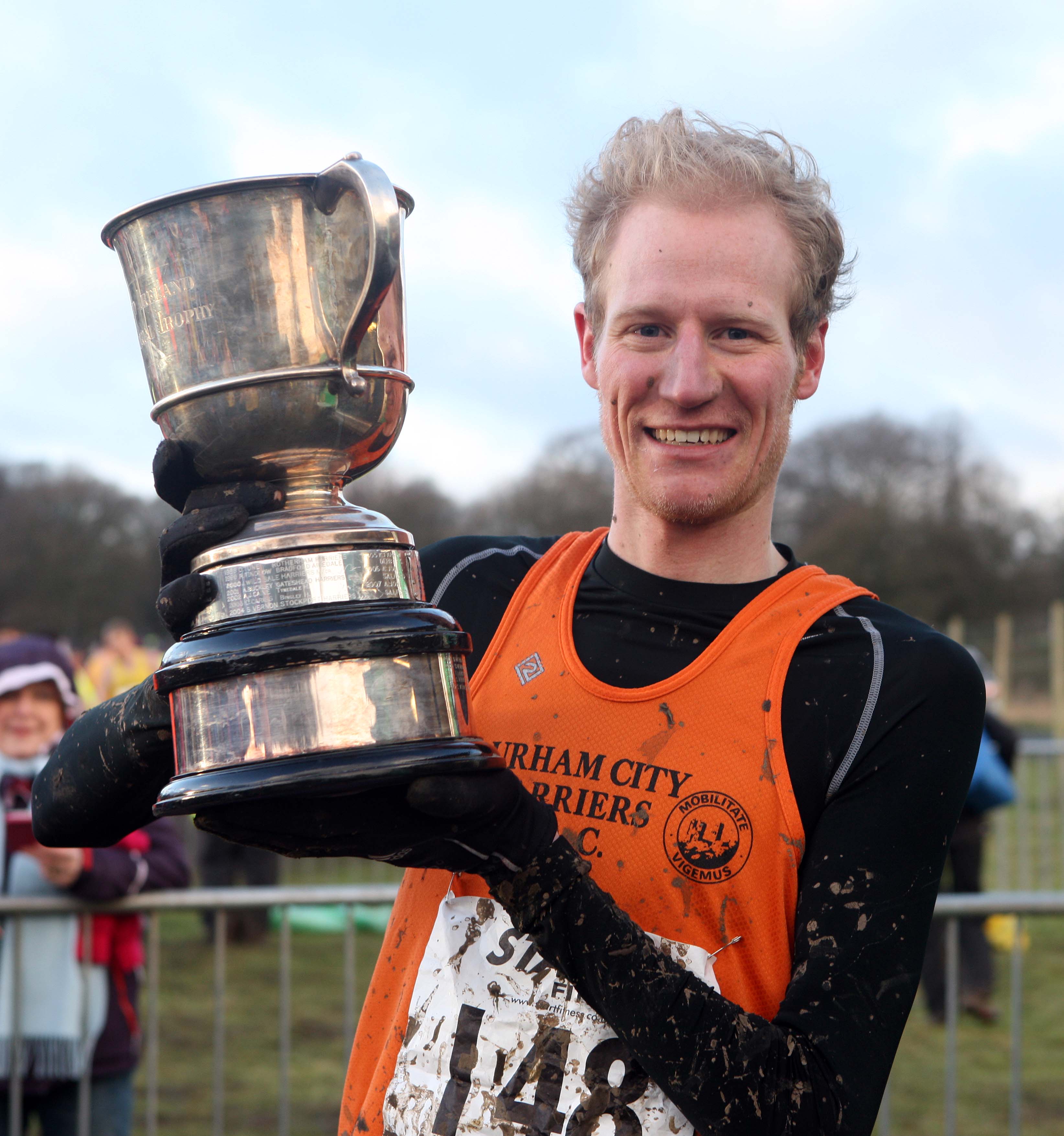 Manchester racecourse while between 1901 and 1908 they were held at Haydock Park racecourse. The reason for the change came before the first world war with the creation of the West Lancs, East Lancs, North Eastern and Yorkshire District associations after which each association took it in turns to stage a championship. However in recent years it’s uncommon for it to be held at the same venue in consecutive years so returning to Knowsley Safari Park for a second time in twelve months is something that does not happened very often these days.
Unlike 2013 when heavy snow was a concern this year we had no snow but just about everything else that the elements could throw at us during the day. The heavy rain which had battered the UK since the new year ensured this was going to be a challenging championship and as the younger athletes in the earlier races cut up the course it was a good old fashioned glue pot underfoot for the seniors
Photo Susan Partridge right by Dave Greenwood
Senior Women The sunshine and bright skies which blessed the earlier events had gone by the time the senior women lined up with the wind bl

owing in the faces as they set off this was going to be a test of strength of the first order. A group of familiar faces at the front as medallists Sue Partridge (3rd) and Rosie Smith (2nd) and a cluster of others including eventual winner Katie Walshaw. It was to be a double victory for Katie as she led home Holmfirrth to the team title although this was tight. West Yorkshire rivals Leeds looked set to collect the title as they closed their final counter in 41st place two places ahead of Holmfirth but solid middle order packing saw Holmfirth take the title Jarrow & Hebburn taking the bronze.
The ever consistent Sue Partridge (pictured above) has now finished in the top three in this event for the last five years some record.
Photo Katie Walshaw left by Harry Shakeshaft

Senior Men This looked to be an open race prior to the start with anyone of a possible half a dozen athletes having a good chance of title as last years and 5 times title winner Steve Vernon was not running. Despite howling winds and hailstones Durham’s Daniel Garbutt who was third last year managed to run 7 seconds faster this time and that was enough for him to lift his first NA senior title, from previous winner Andi Jones of Stockport who was 8 seconds behind with his Stockport teammate Jack Martin a further 9 seconds adrift. It was tight race this year with no one being able to make decisive break until the last lap when Daniel managed to open up a winning margin from the experienced Jones who made light of the heavy going. Leeds was again won the team award packing their six counters in 26 and looking good for a crack at the national title next month. Last year’s national champions Morpeth came second with Salford picking up the bronze medals.