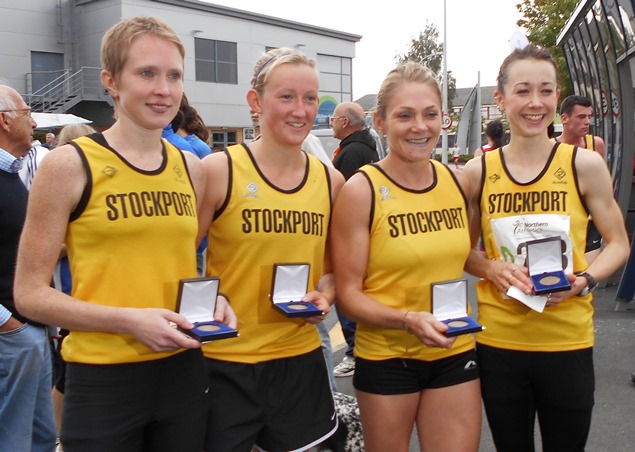 Senior Women
Doing the double , ie one club’s men and women’s teams winning their race, has suddenly become the thing to do in the Autumn Relays. Leeds City did it at the 2013 event at Blackpool, but we will have to go back over 10 years to find the last club before that.
In fact today was a double double for last  years winners Leeds City were also 2nd in both senior races.

Stockport women  were among the 94 teams in the programme with 86 teams on the starting line at 14-05. The first leg was dominated by Kendal’s Rebecca Robinson coming home on that crucial 1st leg in the third fastest time of the day of 20.53 In fact it was Kendal  that dominated the first 3 stages of the race , building up a lead by the end of leg 3 of some 1min 40 seconds over 2nd place and over 2 minutes in front of Stockport in 5th place, However it was on that last leg that Kendal lost ground/
However the last leg is where you want your fastest times and the Stockport team had that absolutely correct. Jessica Coulson produced the fastest time of the day 20.24  as she swept her team from 5th place to cross the line in the gold medal position
The last leg was in fact all change for the top 5 except for 2nd placed Leeds. Leeds had started really badly in 26th place but the experienced pair of Claire Duck, 22.16, and Susan Partridge 2nd fastest time of day 20.36. hauled them back, and on the last leg they snatched  that silver medal position, but only  by 4 seconds.
3rd place belonged to Lincoln Wellington who had been consistently in the top 5 all afternoon . Their last leg runner Abbie Donnelly was able to finished some 35 seconds ahead of the long time leaders Kendal.
Behind Kendal came Rotherham  in 5th and Salford 6th. 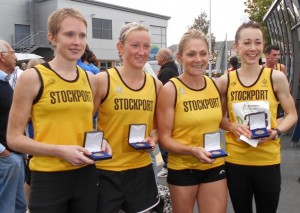