We had three new CBP’s and one equalled on the first day at the Northern Athletics Senior, U/ 20 and U/17 championships. Its normally difficult to single out one good performance over others especially when the athletes are setting CBP performances however, Adam Hague’s vault of 5.51,a world best by a 17 year old, has to stand out.

Coming into this competition on the back of his 5.26 vault in France earlier this month he was clearly in good form. Entering the competition at 5.00 with a first time clearance, his next height was 5.20, to equal the CBP set by Luke Cutts in 2007 again cleared first time. The bar was then raised to 5.30 this was once again cleared on the first attempt. The bar was then raised to the interesting height of 5.51which Adam once again cleared first attempt. As an indication of how good a vault this was you have to go back to Steve Lewis vault 5.25 set in 2005 to see who comes next in the UK all time list for under 20s 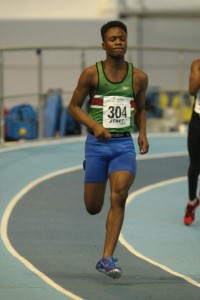 We then had another two CBP’s in the 1500m, first Emily Simpson from City of Sheffield gave a fine demonstration of front running in winning the under 17s 1500m. Her time of 4.38.76 was a new CBP eclipsing the previous of 4.39.95 set by Natalie Grant in 2006. This was closely followed by Racheal Bamford of Leeds City AC in the senior women’s event as she led from gun to tape in a storming performance coming home in 4.23.65 almost two seconds inside the old CBP set in 2012 Alison Leonard.

Sale’s Jona Efoloko was a convincing winner in the under 17 60m when he equalled the CBP of 6.91 set by Andrew Robertson in 2007

Spenborough’s Ashton Greenwood (under 17 300m) produced three fine runs to collect this title In her opening heat she ran 40.35, this was followed by a very quick 40.17 in the semi final which she followed this up with a dominating run in the final to win in 40.23.

City of York athlete Lucy Hadaway produced a good series of jumps to take the under 17s long jump title coming into the competition with a pb of 5.53 she managed a leap of 5.62 in the fifth round to not only set a new pb but with take the title.

Kingston upon Hull’s Annabelle Lewis made a successful return to this championship after long injury winning 60m title in 2013 she missed most of 2014 through injury but made a positive start to 2015 by reclaiming her title in impressive style.

Tim Burns joined a unique club when he claimed his third Northern Athletics indoor title at 400m, in a tightly contested final he won in 48.54

Tom Sommers won the under 20s 60m in a very fast 6.84 just outside the CBP of 6.77 he will now go for the sprint double in the 200m tomorrow. Results
Photo www.darkstarphotos.com