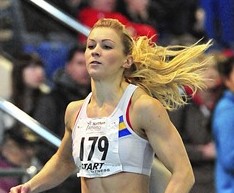 British Heptathlon star Katarina Johnson- Thompson (Liverpool H) returned to competition following injury by retaining her senior women’s long jump title as expected, but in the process, she also managed to eclipse one of the oldest CBPs of these Northern Indoor championships. Fiona May’s CBP of 6.45m had stood since 1991. It was a something that had not escaped Katrina’s coach Mike Holmes as he set her the target of setting a new CBP prior to the competition and with her third round jump of 6.63 she ticked that box and took the title.

Another CBP came in the under 20 women 200m Kristie Edwards (City of Sheffield ) the reigning 200m champion completed the sprint double and after picking up the 60m yesterday she won the 200m in 24.11, this removed Shaunna Thompson’s 2009 mark of 24.18.

Jacob Fincham-Dukes (Leeds City) equalled the under 20 men long jump  CBP with his opening leap of 7.41, however he could not better that mark but it was enough for a clear victory.

Tom Somers (City of York) came into these championships in good form and proceeded to do the sprint double in the under 20 men’s championships he added to achievement by not only retaining the 200m title but also setting a new CBP of 21.28 in the process.

Adam Hague was back to add the senior pole vault title to the under 20 title he won yesterday. He cleared 5.45 then raised the bar to 5.55 but it was not to be this time.

Kelly Chadwick, (Sale Harriers) completed the under 17 sprint double by adding the 200m title to the 60m she won yesterday her time of 25.05. Her club mate Jona Efoloko also picked up the sprint double in the under 17 men’s 60 and 200m. Results
Photos Andy Chubb (Bloor & Johnson)
Photos www.darkstarphotos.com (Chadwick, Somers, Ffoloko) 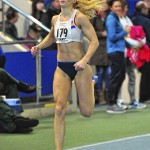 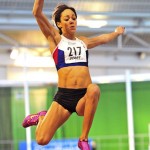 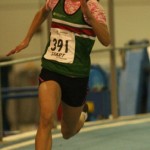 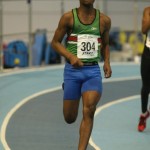