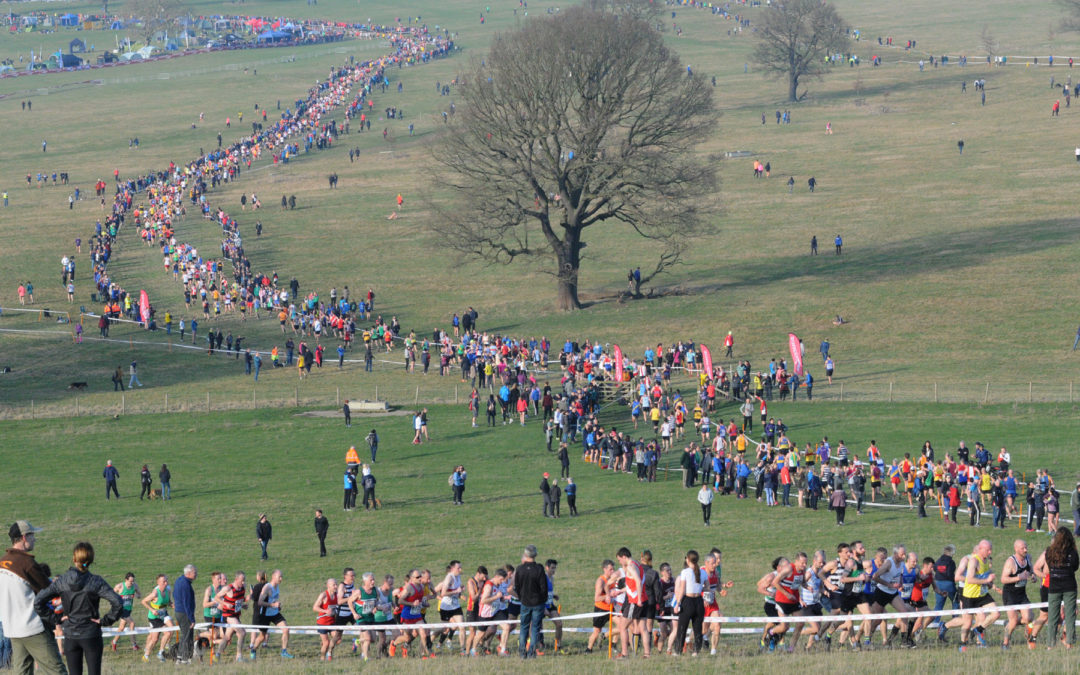 Last weekend’s National Cross Country at the superb setting of Harewood House (Leeds) provided entertainment, drama and even the opportunity for some athletes and spectators to get an early season suntan.

The challenging course with the backdrop of the beautiful estate house was draped in extraordinary spring-like sunshine all day, and the combination of long steep hills, sharp downhills and thousands of good athletes packed together over dry terrain ensured those who were victorious on the day thoroughly deserved the title of National champions for 2019.

Ian Byett (ECCA Secretary) reports: “The quality of the Competition at this years’ Saucony English National Cross Country Championships has been matched by the numbers taking part. Overall 5386 runners crossed the finish line this year, second only to the huge numbers that ran last year at Parliament Hill. The 10 race format came into being in 2003 and since then the numbers taking part have grown and this year was easily the best supported National held in the North of England”.

At this point we would like to pass on our thanks to all the officials, marshals and helpers from across the UK, particularly those in the North, who had prepared the course and venue in the days prior to the event and did such an excellent job on the day ensuring that the competition ran smoothly. Without their dedication and support, these championships would not go ahead, and they would certainly not be something everyone looks forward to each year, so thank you to each and every one of you for giving up your time and expertise for the competition.

Back to the running and there were many highlights throughout the day, with Northern athletes performing particularly strongly across all the age group races, picking up individual and team medals. Fittingly, on their home patch, Leeds City AC created club history by winning both the Senior Women’s and Senior Men’s team titles, whilst individual Northern winners included Under 15 Boy Alexander Thompson (Wharfedale Harriers), the recent Northern Champion making it a clean sweep of County, Regional and National titles.

Furthermore, there were victories for other 2019 County and Northern champions Holly Weedall (Vale Royal) in the Under 15 Girls race and also Samuel Charlton (Wallsend) in the Under 17 men’s event.

In the Under 20 men’s event, Northern Champion Rory Leonard (Morpeth Harriers) added the national title to his collection and in the Under 17 Women’s race, Olivia Grace Mason (Border Harriers) also took the title, making it five individual Northern winners across the ten age-group races on the day.

Huge congratulations to everyone who took part in the event or helped to make it a truly wonderful occasion.

Full results can be found on the English Cross Country Association website by clicking the link here http://www.englishcrosscountry.co.uk/news/saucony-english-national-xc-results-2019/