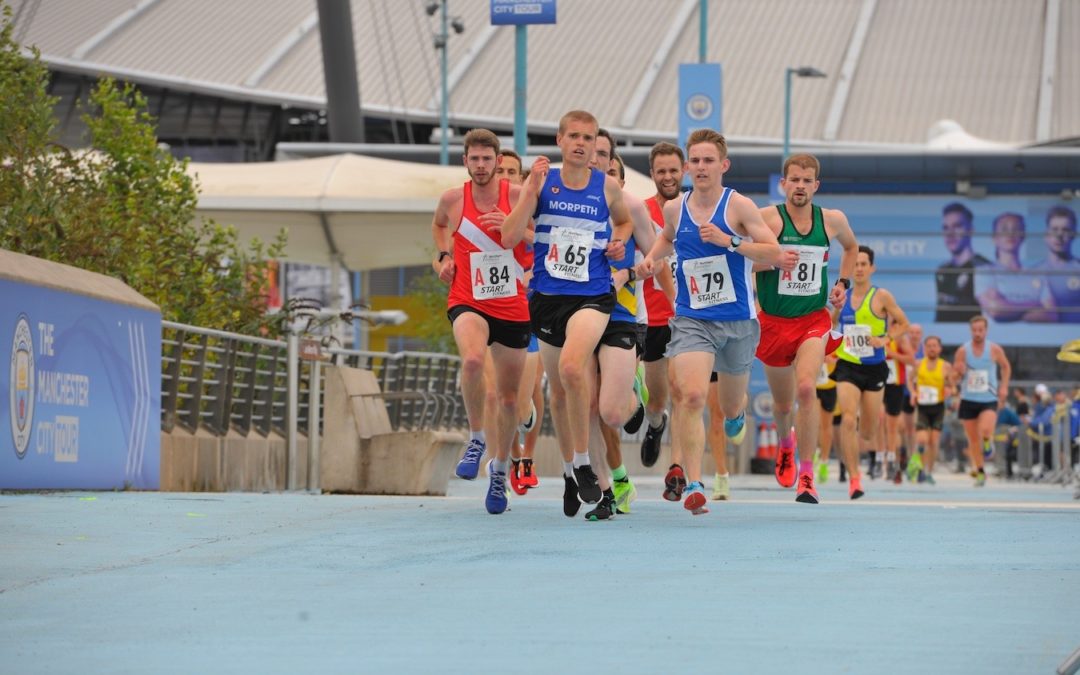 Cloudy but dry conditions prevailed at Sportcity for start of the 2019 road relays, with the Young Athletes events in the morning and the seniors in the afternoon

First off was the Under 13 Boys, which ended up on the last leg as a real scrap between Sale Harriers and the up and coming talent of Trawden A C. Lincoln Wellington were first back into the stadium, on leg 1, but finished the race in 18th position.

Trawden then took the 2nd leg ahead of Sale, but the last leg was a tremendous race, with Sale winning by just 2 seconds, ahead of Trawden, with Wirral overtaking Liverpool to take the bronze medal position. Rotherham were the highest placed B team 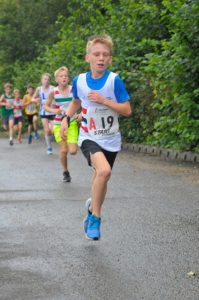 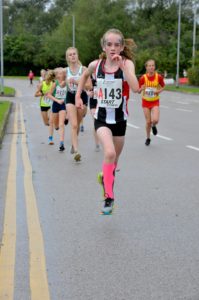 Under 13 Girls. 3 Stage
The first 2 legs were dominated by Rotherham, Stockport, and Keighley & Craven, but yet again Sale came through on that final leg as Sara Clough moved the club up 3 places and into the bronze position, ahead of Keighley & Craven, but behind winners Rotherham and 2nd placed Stockport. Sale Harriers were the highest placed B team.

Under 15 Boys. 3 Stage
This was a fast race with the 3 podium clubs each having one athlete in the top 3 fastest legs, and each separated by just 1 second.

Fastest of all 11.08 was Salford’s Max Lowrey on first leg. On 2nd leg Jake Wilson, Vale Royal, ran 11.09, 2nd fastest time of the day, which took his club up 7 places into 2nd position, just behind Salford.

Leg 3 was all change as Salford dropped to 3rd place. North Shields Poly moved up 4 places to 2nd with Joshua Blevins’s 3rd fastest time of the day, 11.10, Vale Royal moved up 1 place and won by some 26 seconds, Wirral A C were the highest placed B team. 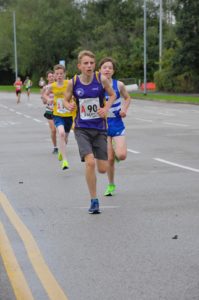 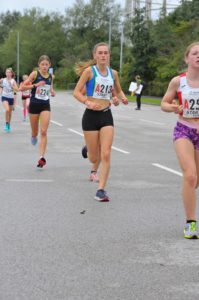 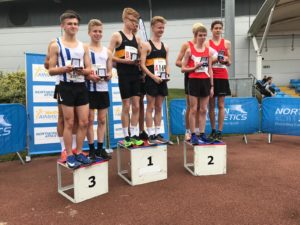 Under 17 Men 3 Stage
First to return into the stadium on leg 1 were Blackburn Harriers, closely followed by Houghton Harriers and Salford Harriers.

It was Salford and Houghton that dominated the race, both of them always being in a podium position. However it took the fastest time of the day 11.23, by Will Bellamy to haul Houghton Harriers from 3rd to 1st place on the last leg. 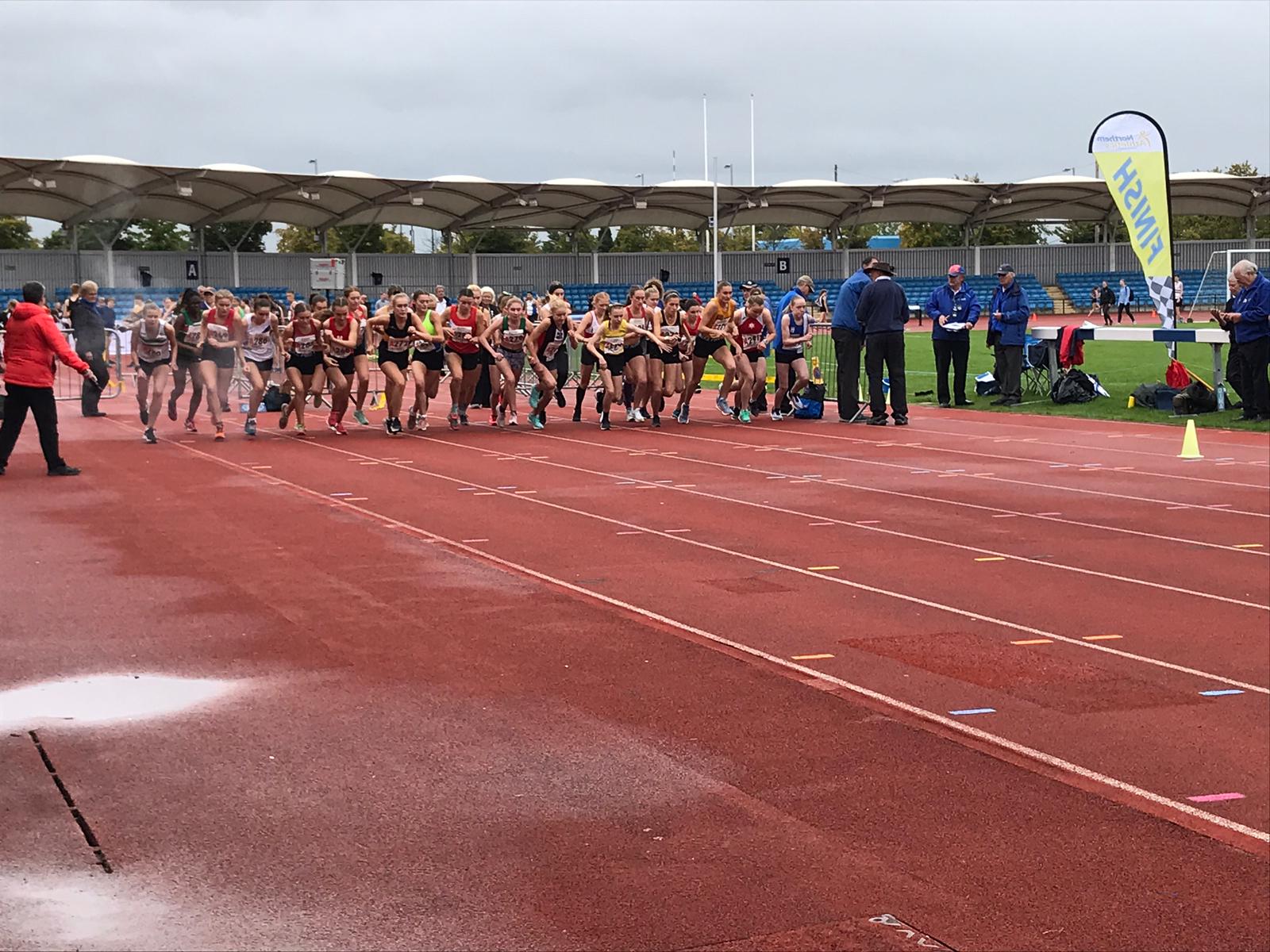 Under 17 Women 3 Stage
Salford Harriers had 2 of the top 4 fastest times, but were in 5th place at the end of leg 1. Chorley Tri were ahead after the first leg, and again were never out of a podium position, as were Hallamshire Harriers, but it was the yellow vests of Liverpool that were 2nd at the end of leg 1.

Samantha Mason moved Salford into the lead with the 2nd fastest time of the day, Hallamshire 2nd, Chorley 3rd, and Salford B 4th.

Fastest leg of the day by Ty Brockley-Langford 13:17 followed for Salford as they won by 73 second, Hallamshire Harriers remained 2nd and Chorley Tri 3rd, Highest placed B team went to Salford in 5th place. 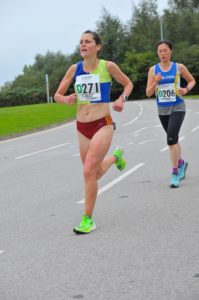 Women’s 4 stage
73 teams started on the first leg, which proved to be a very fast leg, with the top 5 fastest of the day all on that first leg. But the question remained could anyone topple the Leeds City team from the champions spot.

Lincoln Wellington’s Abbie Donnelly was first back with in 20.14, some 43 seconds ahead of Lucy Crookes of Leeds, and Leigh Harriers’ Abigail Howarth in 3rd. Surprisingly Leigh only had half a team competing. Ribble Valley were 4th and Rotherham’s A team were back in 13th place, some 2 places behind their B team!!

Lincoln Wellington remained in pole position at the end of leg 2 with a gap over Leeds City of 40 seconds, Vale Royal 3rd, 4th Rotherham B and 5th Rotherham A . Not only was the Rotherham B team ahead of their A team, but the first 2 leg of the B team had now run faster than the A team.

However the evergreen Jenny Blizzard was soon going to save her team manager a red face on the 3rd leg, with another outstanding and inspirational performance.

Jenny ran 21.44, 8th fastest on the day, to keep the Rotherham A team in contention, and, at last, in front of their of their B team. Leeds City had leapfrogged Lincoln Wellington into 1st place, with Vale Royal 3rd, Ribble Valley 4th, followed by the 2 Rotherham teams.

So could Rotherham, A or B team, topple Leeds, or had Lincoln Wellington saved the best until last.

If the 1st leg had the top 5 times then it took the 6th fastest time, 21.12 by Nicola Devine, Rotherham A, to move her team up 4 places and to the top spot on the 4th and final leg.

Rotherham winning by 10 seconds, ahead of the 2018 champions Leeds City, who themselves were only 3 seconds ahead of Lincoln Wellington, who had managed to pass Ribble Valley on that last leg.

Vale Royal were 5th before that over performing Rotherham B team came in 6th, and obviously best placed B team.

Salford Harriers had the experienced Bev Simons, back from injury, on their last leg and as always Bev showed how to race that final leg as she pulled up a place for 7th. 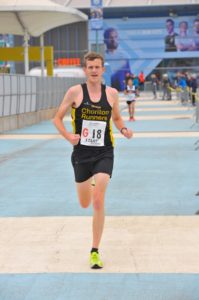 Men’s 6 stage
There were 116 teams on the starting line, including a record breaking 8 teams from Salford Harriers. The experience of the Leeds City team was up against local clubs, Sale , Salford, and Altrincham. Lincoln Wellington the 2018 champions had not entered a team.

However is was the red and black  vest of St Helens Sutton that first appeared back on the track, quickly followed by Vale Royal, Sale and Bolton. Leeds were back in 7th, Salford 8th.

Normal service had been resumed by the time leg 2 was concluded. Matthew Grieve had moved Leeds City up 6 places to finish at the front, St Helens Sutton and Vale Royal were already 30 seconds adrift, but the big movers were further down the finishers, Salford B up 11 places, Wakefield up 14 places and Rossendale up 10 places.

The success of Leeds’ teams of 10 years ago was their ability to get to the front and just stay there on each leg. Could this be happening again or had one of the other big guns got their team selection spot on.

Well the gap narrowed on leg 3 as Sale pulled it back to 23 seconds, with Salford a further 23 seconds behind. The outstanding performance of leg 3 was from Mohammed Aburezeq, Altrincham, who clocked the fastest time so far of 19.22 to pull Altrincham up 19 places into 5th just ahead of the Salford and Leeds B teams.

St Helens were now falling away, they  eventually finished 24th after a brilliant first 3 legs. But Leeds were now flying. Phillip Sesemann produced the fastest leg of the day, 19,18 to almost double the lead, but solid performances from Sale and Salford kept them up there close on Leeds’ heels. The talented Rory Leonard moved Morpeth up 4 places to 4th.

So which team manager had got the running order correct, with all the usual contenders up there, the only certainty seem that we would have new champions.

Certainly Leeds were up there as they finished leg 5 some 74 seconds ahead Sale, Salford close by and Morpeth 4th. Liverpool Harriers suddenly appeared in 5th, up 4 places, were they making a late surge for the podium?

Fear not Leeds simply turned the screw and doubled their winning lead as Graham Rush ran 19.50 to ensure Leeds regained the 6 Stage N A championship that they last held in 2013.

Sale Harriers were in 2nd position, Salford 3rd, as the top 3 had remained the same for the last 4 stages. A superb final leg from Carl Avery, 19.27 and 4th fastest, pulled Morpeth to within 12 seconds of the Salford A team, whilst t Salford B were 5th , and Liverpool 6th.

Presentation was by N A president Stan Taylor, and making an impressive Northern Athletics
commentary box debut was Dean Hardman.