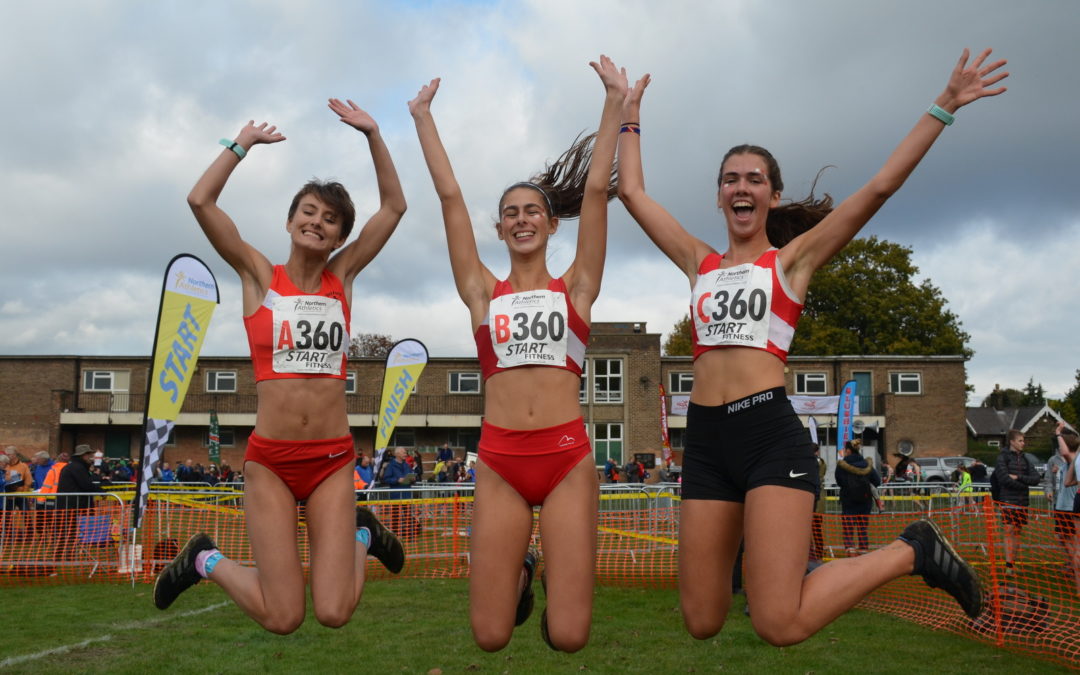 THE popularity of the Northern Athletics’ Cross-Country Relays continues to grow at a pace resulting in a record number of teams closing in in what was the 10th anniversary of the event after NA linked up with the Cutlers Relays back in 2010.

The competition has changed very little in that time giving competitors a nice opening stint leading into the arduous cross-country season ahead.

Once again, Rotherham’s Steve Gaines was at the forefront of the organisation and he, and his team, must be congratulated for hosting another fine championship, albeit which did have its minor hiccups but were dealt with in an orderly and efficient manner.

The weather also played a big part, as did all the volunteers and technical officials, in ensuring the relays were a resounding success. 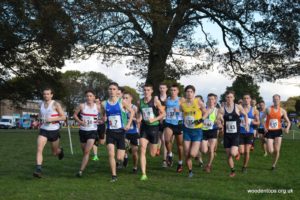 Lincoln Wellington missed out on a podium place in last year’s championships after claiming top spot in 2016 and 2017 but they were not to be denied this time round once they hit the front on leg two.

Middlesbrough AC led at the first changeover thanks to junior international Josh Cowperthwaite whose clocking of 10min 23secs proved to be the fastest time of the day. Rotherham were in second place followed by City of Sheffield and Dearne and Roundhay Runners with the eventual winners just over 20 seconds adrift of the Teeside outfit.

On stage two Lincoln moved into pole position thanks to Thomas Trimble whose 10:32 was the fourth fastest overall. Lincoln now had a 13 seconds lead over Middlesbrough (Ben Bergstrand) as Salford moved through to third from fifth and Sale, who were now in fourth place after passing on in eighth at the end of the opening leg.

Jake Richardson consolidated Lincoln’s position on the penultimate stage as Sale moved into second place ahead of Hallamshire who had started off in 10th position in the early stages. Middlesbrough were now back in fourth place followed by Liverpool and Rotherham. Joe Wilkinson, a regular in Lincoln’s previous victories, had the honour of contesting the glory leg and though he had a comfortable cushion he managed to push on regardless resulting in recording the second fastest overall time of the day, just four seconds adrift of Cowperthwaite’s figures.

Hallamshire, thanks to Cameron Bell’s 10:41 on the final leg, came home in second place 47 seconds behind Lincoln with a delighted Middlesbrough finishing in third place, a superb all-round performance considering their quartet were all under-20! Sale followed Middlesbrough home then came Liverpool, City of Sheffield and Dearne, Rotherham, City of York, Sunderland with Birtley completing the top 10.

Unfortunately, however, Hallamshire were denied the silver medals due to a registration technicality on one of their athletes and were eventually disqualified meaning Middlesbrough were awarded second place and Sale moving up into bronze medal position. 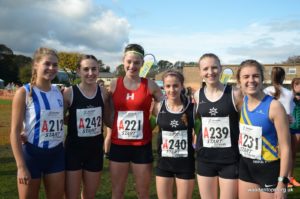 Leeds City had previously made it onto the podium only once in the past 10 years when they finished runners-up behind Lincoln Wellington in 2015. However, they set out their stall in determined fashion from the off to put that record aside when they lined up with a trio of talented athletes.
Georgia Malir, a regular in Graves Park, took her place on the start line to contest the opening leg and came to the changeover 14 seconds clear of Durham City’s Katie Iliffe after clocking 12:15 for her two-mile stint, a time which was to prove to be the fastest overall of the day. Sale were in third place followed by Rotherham, Lincoln Wellington and Darlington. Alice Leake extended Leeds City’s advantage with the fastest second stage time – third quickest of the day – as Rotherham – thanks to the ever-reliable Jenny Blizzard – moved into second place ahead of Sale and Lincoln Wellington who, unfortunately, were unable to close in a team.

On stage three Jennifer Walsh opened up the gap even further with the second fastest time of the day to bring Leeds City home for their first-ever victory in a time of 37min 01sec. Defending champions Rotherham came through to finish runners-up 45 seconds behind with their B team just over a minute further adrift in third place. However, with the rules stating no two teams can win two sets of medals it meant that Hallamshire, who finished fourth, were awarded the bronze medals with the Rotherham second-string still making it to the awards ceremony as the leading B team to finish. 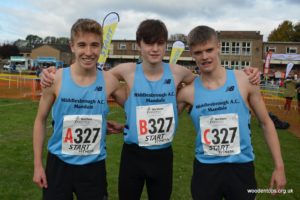 The action-packed programme saw a superb battle in the early stages of the contest with track specialist Ethan Hussey (Leeds City) and Middlesbrough’s Archie Lowe quickly gaining an advantage over their rivals. As the stage unfolded it was Lowe who proved the strongest in the closing stages to come to the changeover point with a four-seconds cushion over Hussey with Houghton (Henry Johnson) in third place a further 15 seconds adrift. Not surprisingly, the three athletes were accredited with the fastest overall times of the day.

Hallamshire, who were in sixth place, moved into pole position on leg two with Middlesbrough now in second spot ahead of Derby AC, Houghton and Leeds City.

Unfortunately, Hallamshire were denied going on to claim victory as they didn’t field a third athlete so it left Daniel Payne, with the fourth fastest overall time, to bring Middlesbrough home to top the podium ahead of Leeds City with Salford completing the one-two-three as Chesterfield just edged out Derby for fourth place. 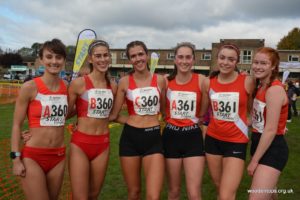 Salford claimed victory over fellow Greater Manchester rivals Sale though the verdict wasn’t decided until the final stage. Sale, thanks to the fastest overall time of the day by Lara Crawford, led on the first leg followed by Wirral and Longwood with Salford back in fourth place 36 seconds adrift of the leaders. Sale continued to lead on the penultimate leg as Hallamshire moved into second place ahead of Wirral with Gateshead now fourth as Salford dropped back one position to fifth. On the final leg Samantha Mason cut back the leaders to bring Salford home clear winners by 11 seconds ahead of Sale with Hallamshire just three seconds further adrift in third place. 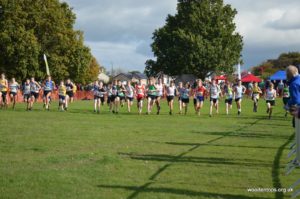 Merseyside outfit Wirral AC led throughout to win comfortably by 44 seconds. Tj Jones gave them the perfect start by posting the second fastest time of the day as he entered the changeover zone five seconds clear of Stockport with Derby AC in third position followed by Kendal and Salford. Ethan Brady Jones extended Wirral’s advantage on the penultimate leg  as Stockport consolidated second place as Kendal moved into third spot ahead of Sale and Salford. William Strickley kept the momentum going on the final leg to bring Wirral home in gold medal position as Matthew Russell brought Salford through into second place ahead of local rivals Sale. For good measure Wirral’s second string finished in fourth place while Birtley, who finished seventh had the fastest athlete on view as Chris Perkins brought the North East trio through from 20th on the final leg. 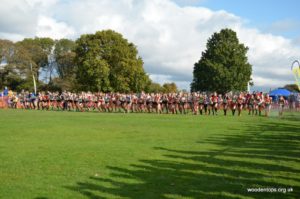 Wirral AC were also leading at the end of stage one thanks to the overall fastest time of the day by Keira Brady Jones but at the end of the day were just run out of a podium place by six seconds. Cleethorpes and District were in second place behind Wirral with Holmfirth third and Chester-le-Street fourth and Hallamshire fifth. On leg two Hallamshire moved to the front followed by Chester-le-Street with Wirral in third place followed by Sale and Hallamshire’s B team. Emma Shipley had no problems bringing Hallamshire to a comfortable 19 seconds victory over Chorley whose Gabrielle Hodson brought them through to claim the runners-up awards after taking over in seventh position. Sale completed the medal one-two-three. 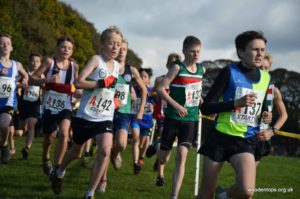 Jason Hughes, with the fastest overall time, had Barnsley in the lead at the end of stage one handing over ahead of Trafford (Charlie Stanway) and Cleethorpe’s George Wilson. Sale moved from seventh to first on stage two with Wirral in second place ahead of Rotherham and Darlington. Freddie Meredith had no difficulty in keeping Sale ahead on the final stage with Wirral also consolidating second place while Darlington, who had started off in 19th place, moved into bronze medal position pushing Rotherham back into fourth. 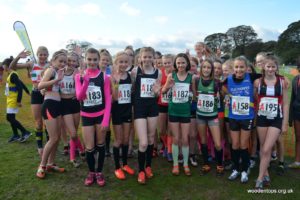 Officials had to be on their metal at the end of the first stage as Nia Harrison Sargent (Halifax) and Keighley and Craven’s Maisey Bellwood couldn’t be separated with both being credited with 5:48, the joint fastest times of the day. Rotherham were in third position followed by Cleethorpes and then City of York. All things changed on leg two as Emily Bott moved Rotherham into the lead followed by Stockport with Keithley and Craven dropping back into third place. The leading two positions changed on the final stage with Freya Murdoch moving Stockport into pole position to win by just one second as Rotherham finished runners-up ahead of Keighley and Craven. 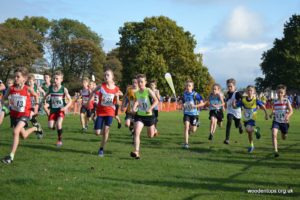 Hallamshire led throughout the contest with Tom Thake giving them the ideal start by posting the fastest overall time of the day. City of York were in second place thanks to Daniel Campbell who were followed by Gateshead, Sale, Salford and Wirral. Jem Martin consolidated Hallamshire’s advantage on stage two with City of York still in second spot ahead of Sale and Gateshead. Joe Thake brought Hallamshire home to win by 14 seconds as Sale moved into silver medal position ahead of Gateshead. 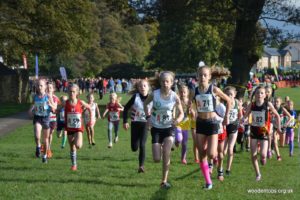 Rotherham led at the first changeover thanks to the fastest time of the day by Layla Roden who had a six-seconds lead over Hallamshire with Wirral in third place followed by Keighley and Craven. Hallamshire (Grace Ingoe) moved into the lead on stage two followed by Liverpool (Valerie Teare) as Liverpool’s B team moved from seventh to third. Liverpool’s Erin Fay produced the second fastest time of the day to move into pole position on the final stage pushing Hallamshire back into second place with Wespa Fire Athletics, thanks to Molly Carvell, moved through to complete the one-two-three.