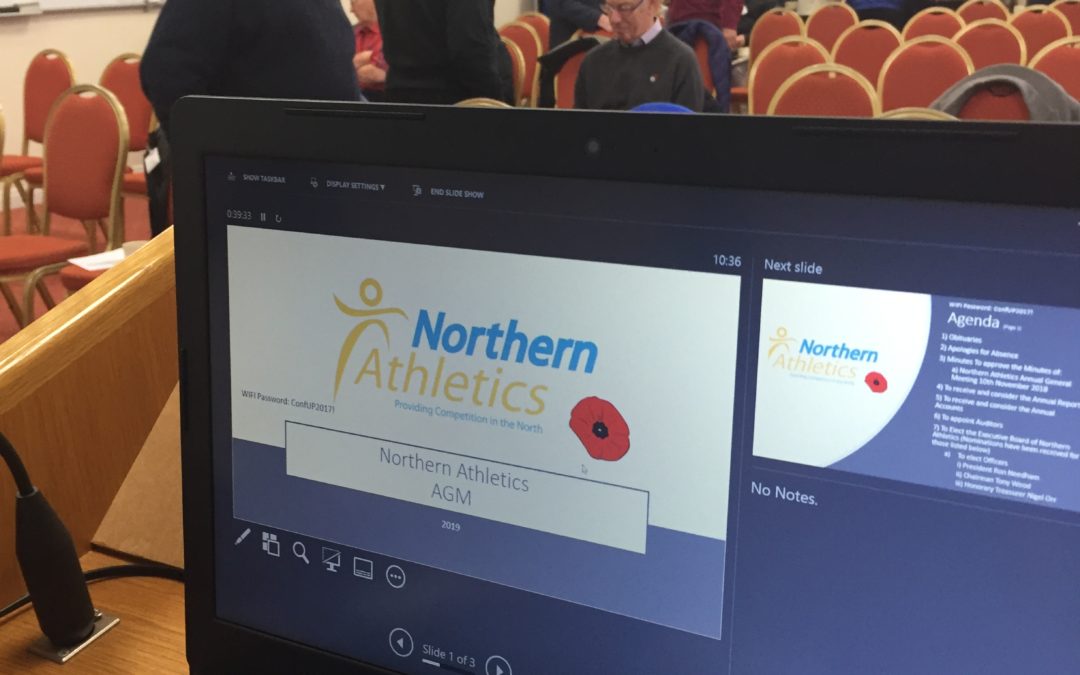 Northern Athletics hosted their Annual General Meeting on Saturday 9th November at Junction 25 Conference and Meeting Venue in Brighouse, West Yorkshire with an excellent turnout from our affiliated clubs. The meeting began promptly at 11am with a minute’s silence for remembrance Sunday and colleagues and friends within the athletics community that had passed away within the last year. After approving the minutes from 2018 the Annual Report was discussed. The representatives from each discipline took the stage to update the meeting on the success of our championships, events and activities throughout the year.

First up was Steve Gaines to give the Cross Country report. Steve reported a positive year with one highlight being the organising of the National Cross Country Championships at Harewood House and even securing through a local club some BBC Coverage which included the work we do around the Northern Cross Country Championships. Both championships were a great success with the National thought to have been one of best ever. Thanks were given to our volunteer clubs and officials. Some issues at the XC relays at Graves Park were discussed which will be reviewed for the event in 2020.

Following on from Steve’s overview, the Chairman Tony Wood brought to the attention of the room that a club had approached Northern Athletics to consider equalisation of distances within the cross country events for men and women. There was a lengthy discussion with varying views and opinions and as such Northern Athletics have agreed to discuss this further at Board level.  It was noted the current survey compiled by the ECCA was against equalisation. 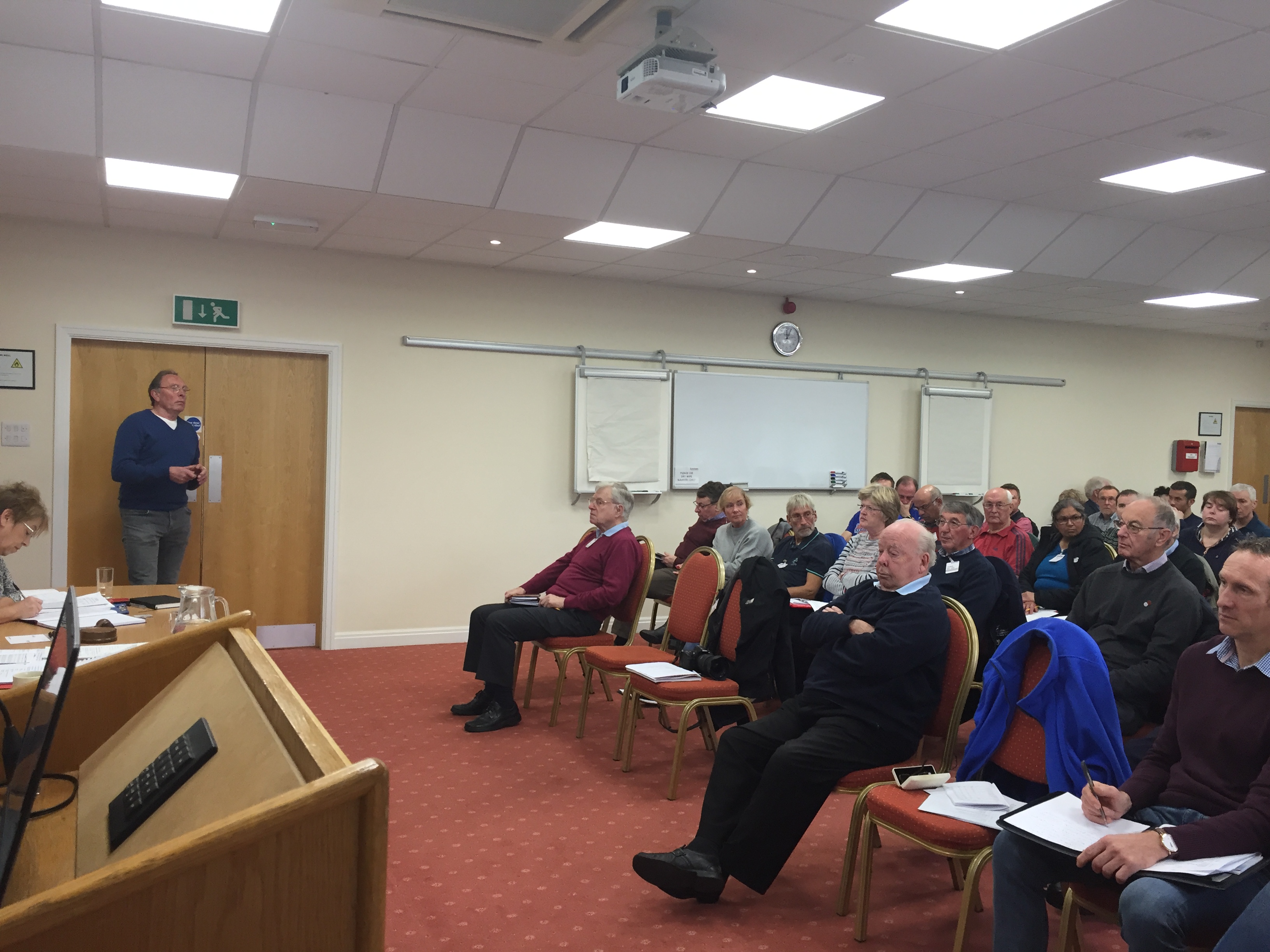 Next we had Ken Smith and Bob Brimage to give an overview of Road Running from the 2018/19 season. Overall it appears that entries are on the increase across road running and the standard is remaining at a high level. Bob reported some issues surrounding the proposed venue at Catterick for the 12/6 stage for 2020 and as such Birkenhead Park will be used again for its third year in succession. Redcar was a possibility for 2021. A special thank you to the volunteer teams at both at Birkenhead and Sportcity in Manchester for assistance with the 2019 Autumn Road Relays.

The Track and Field report took a different approach. While XC and RR entries are on the increase and venues are coming forward to ask to host events, facilities are getting thinner on the ground for Track and Field. Whilst participation is steady, it is not increasing except for the u20s this year. Venue costs are increasing and so Malcolm Fletcher urged the clubs in the room to promote the Northern Athletics championship events, to get athletes to the events and ensure a future for Track and Field Championships with better venues. Northern Athletics in turn will increase our promotion and it was mentioned that Nichola Skedgel was now with Northern Athletics at the office and was being very effective increasing our profile on social media.

The Chairman Tony Wood thanked all the representatives for their overview and commitment to their disciplines.

Steve Gaines then gave an overview about the new Official’s Project which Northern Athletics are leading on in conjunction with England Athletics. Northern Athletics have been given a ring fenced grant of £33,000 to develop a recruitment and retention campaign for Officials with some technical elements involved within the North of England. England Athletics are supporting this. The project is still at the ‘fact finding’ stage but a number of productive meetings have taken place and as such we will be publishing updates and perhaps we could survey clubs in due course to get further input. 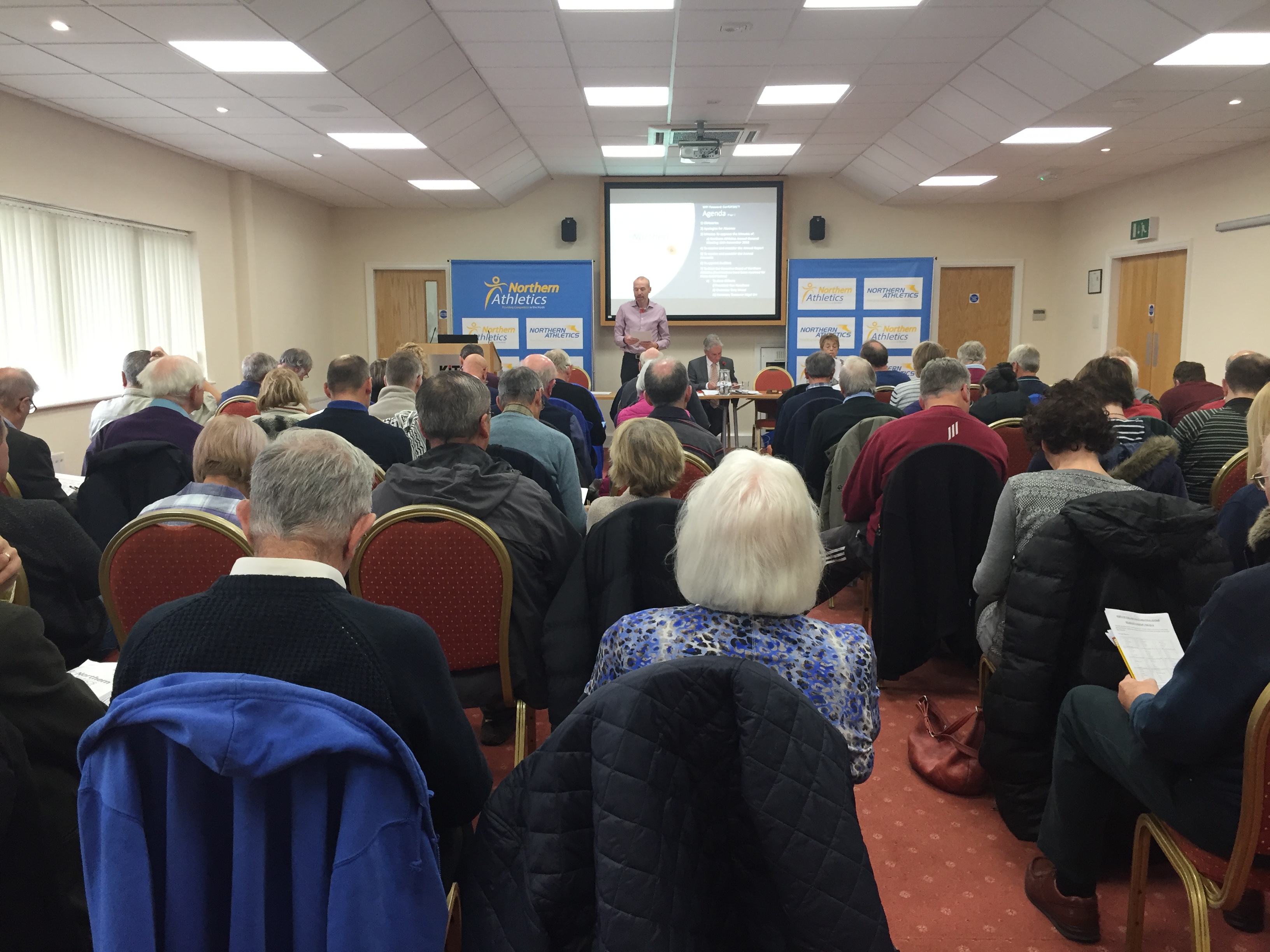 Nigel Orr gave an overview of the Income and Expenditure for Northern Athletics for the year of accounts ending on the 31st March 2019. Highlights of the report were £12,000 income from Start Fitness as sponsorship, £34,524 income from half a year’s club affiliation fees, and an England Athletics Competition Grant for the final year which meant there was a surplus for the year of £28,480. It was worth making a note of caution that without the competition grant, Northern Athletics would have been in deficit by £4,160 which once again highlights the importance of clubs supporting Northern Athletics through the affiliation scheme, which is greatly appreciated.

Tony Wood gave an overview of his understanding of the position of the Southern and Midland areas and fielded questions relating to why they were getting money from England Athletics but the North no longer were. It was his understanding that the other areas are being urged to develop their own affiliation schemes. Overall Northern Athletics were commended for thinking ahead, having an agreed strategy and initiating an affiliation scheme. He said the future for competition providers out there was uncertain and Northern Athletics anticipating this had acted decisively.

Tony Wood thanked Nigel for compiling the accounts over many years now and the meeting approved the accounts.

Ron Needham, a loyal servant of Northern Athletics especially as clerk of course at many National and Northern Cross Country Championships was elected as President of Northern Athletics with the other officers remaining the same with Tony Wood continuing as Chairman, Nigel Orr as Treasurer, Steve Gaines and Arwel Williams as XC Representatives, Bob Brimage and Ken Smith Road Running Representatives, and Malcolm Fletcher and Elaine Williams Track and Field Representatives with Malcolm Rogers Co-opted. Stan Taylor had sent his apologies for the meeting but thanks were given to Stan for his Presidency and his time over 2018/19.

Constitutional amendments changing wording from territory to area and NoEAA for Northern Athletics were agreed. 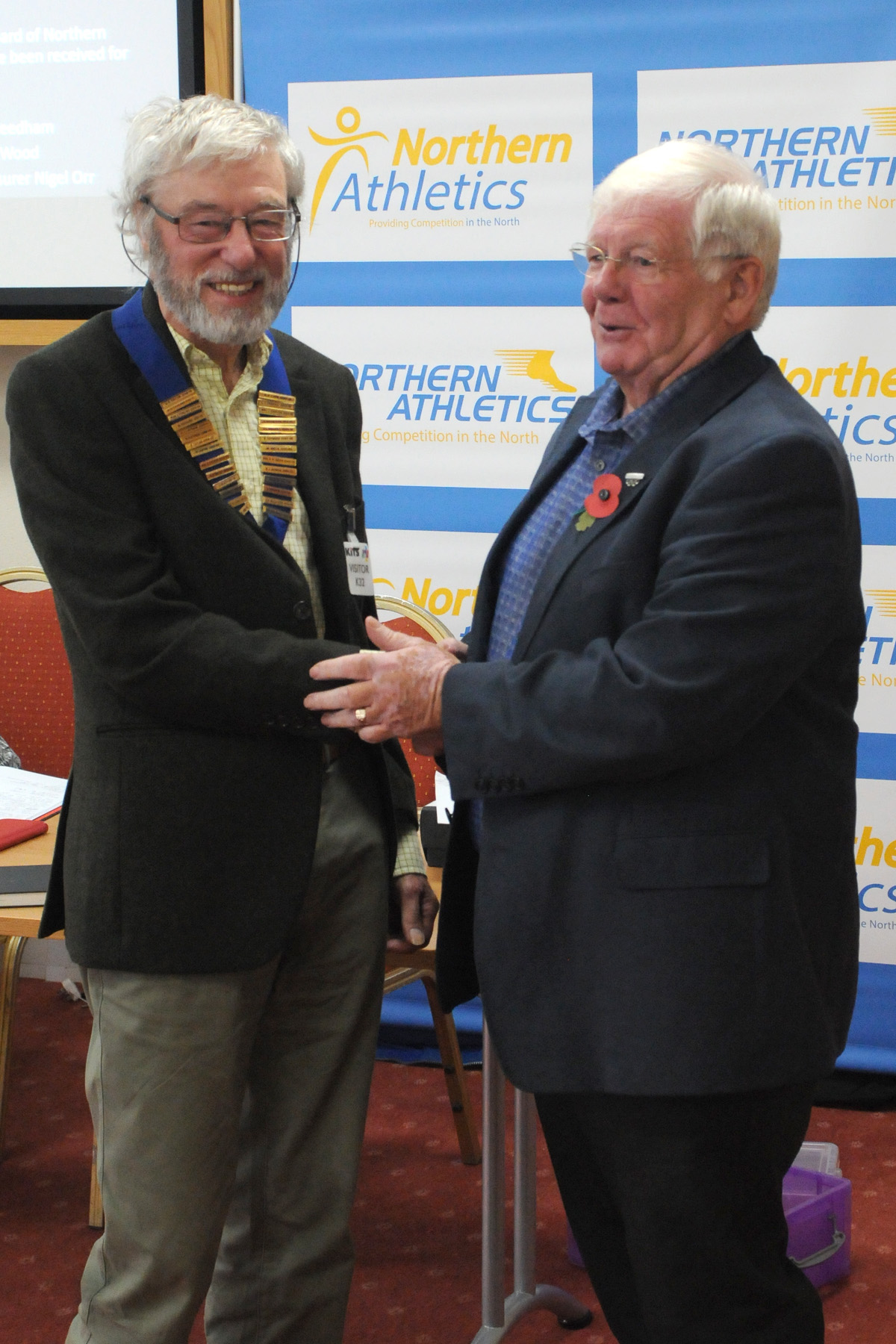 The AGM closed with one final discussion on the future of Northern Athletics. Tony Wood highlighted how Northern Athletics had responded to the results of the survey issued earlier in the year. Examples achieved so far were given such as the start of the official’s project, the change of the AGM location, events being held around the North such as the XC Championships being held in North Yorkshire in 2020 and increased profile on Social Media.

There were a few comments from the room and the possibility of making changes to the current affiliation scheme. The Chairman responded assuring the room that Northern Athletics will constantly evaluate the scheme and keep an open dialogue with all clubs throughout the year. However he said the survey was overwhelmingly in favour of retaining the scheme as it is and that strategy was creating stability and security for Northern Athletics.

The meeting was closed with thanks to all who attended. This was much appreciated by all of us at Northern Athletics.