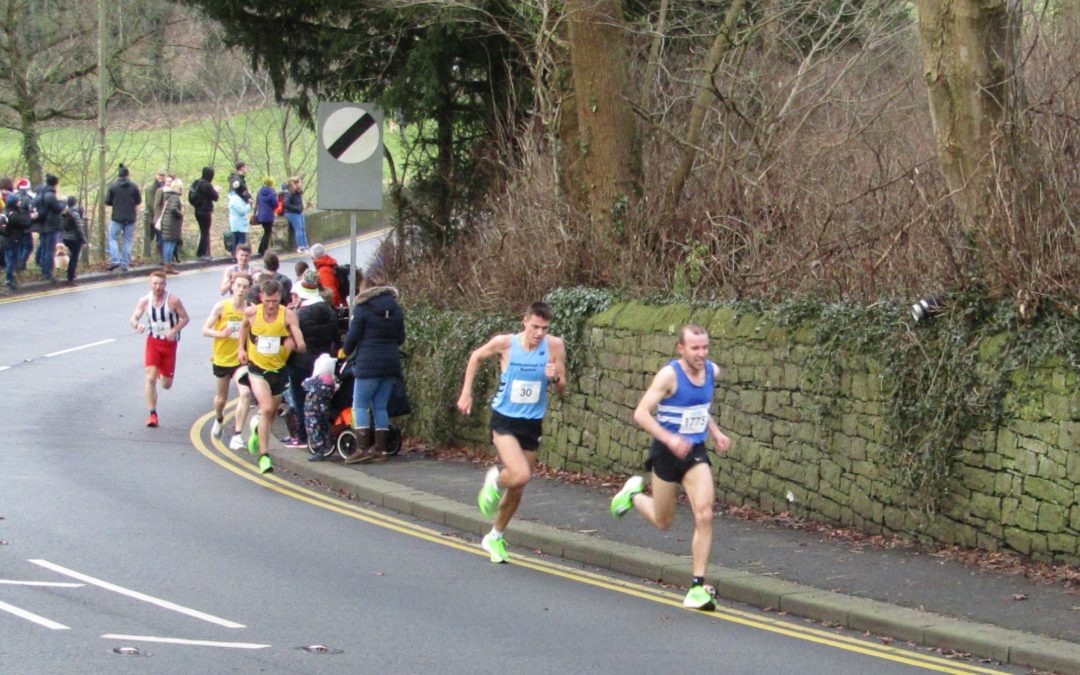 Entries had closed 4 weeks before the race, with elite athletes promising a fast run in both the men’s and women’s races. Weather on the day exceeded expectations, with 10 degrees, little wind, some cloud and no rain.

In the open race, Marc Scott, who grew up a Richmond and Zetland athlete, having only recently changed club to Cambridge and Coleridge, was the clear favourite. In the NA men’s race, it would be interesting to see how the youngster, Joshua Cowperthwaite, would perform against experienced athletes including Derek Hawkins, brother of Callum, Carl Avery and Blackburn Harrier, Rob Warner.

The favourite in the women’s race was Jess Judd, from host club Blackburn Harriers, but the successful Leeds City women would certainly be challenging her.

Almost 1300 entrants lined up at the start and even in the first 100 metres, it was clear that Marc Scott was imposing his will on the race. The lead group of approximately 20 athletes started to pull away, even before the first downhill section. The leaders reached 4K in approximately 12.15, with Marc Scott just ahead of a large group.

In the women’s race, Jess Judd was quickly establishing a lead as she was out on her own. Just before the 15 minute mark, Marc Scott put a burst in and pulled 3 athletes clear of the pack by the turn.

By 6k, the leading pack was down to 3, Marc Scott, Ben Dukstra and Charlie Grice. Joshua Cowperthwaite and Derek Hawkins were racing together in the NA championship.

By 8k, the leader was out on his own with Charlie Grice up to 2nd, just ahead of Ben Dukstra. It was now a time trial for Marc, as he continued to pull away from 2nd. At 9k he was timed at 23.10, as he hugged the racing line chasing his own course record of 28.58. 2nd and 3rd were close together, ahead of a large gap to 4th.

With 100 metres to go, Marc could see the timing clock and that he was inside his existing course record. His finishing time was confirmed at 28.32, a new course record. Both Ben Dukstra, 28.53 and Charlie Grice, 28.55, were also inside the old course record.

The first NA athlete home was Josh Cowperthwaite, Middlesbrough, just ahead of Derek Hawkins, Leeds City, and Morpeth’s Carl Avery, both having been given the same time. In the team event, host club Blackburn were 3rd, Sale 2nd and Salford were the NA winners.