Mark has been involved in athletics since joining New Marske Harriers at the age of nine. While confessing himself never to have been a decent athlete, Mark has competed across distances from indoor 60m races to 45 mile ultras classing his career highlight as qualifying for the English Schools Cross Country at Parliament Hill in the year 2000. During his time at New Marske, Mark gained a taste for event organisation, helping with the club’s well-known Mermaid 10k and Victoria 10 mile races, as well as helping stage the North East Cross Country Championships at Saltburn in 1999.

Following his time at New Marske Harriers, Mark spent four years as a member of LC Rapid Dortmund in Germany, before returning to Britain and eventually becoming a member of Darlington Harriers & AC. Mark has spent time as a committee member and team manager. He also served as the chairman of the club, helping oversee two cycles of Clubmark accreditation, alongside spending time on the England Athletics North East Regional Council and the North Yorkshire South Durham committees.

Meanwhile, Mark has kept his involvement at the sharp end of the sport and has qualified as a level-1 Endurance official, level-2 Track Judge and level-3 Starter and Starter’s Assistant. During lockdown, Mark also qualified with a Postgraduate Certificate in Sport Business, Management & Policy from Manchester Metropolitan University.

After a career in the steel and international logistics industries, Mark is absolutely delighted to attain this position working in his sport, for Northern Athletics. He will work alongside Judith Temperton and the Board at Northern Athletics to further enhance the reputation of our organisation. We wish him well in his future endeavours for our area. 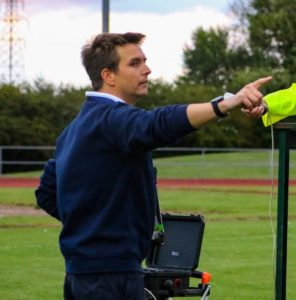