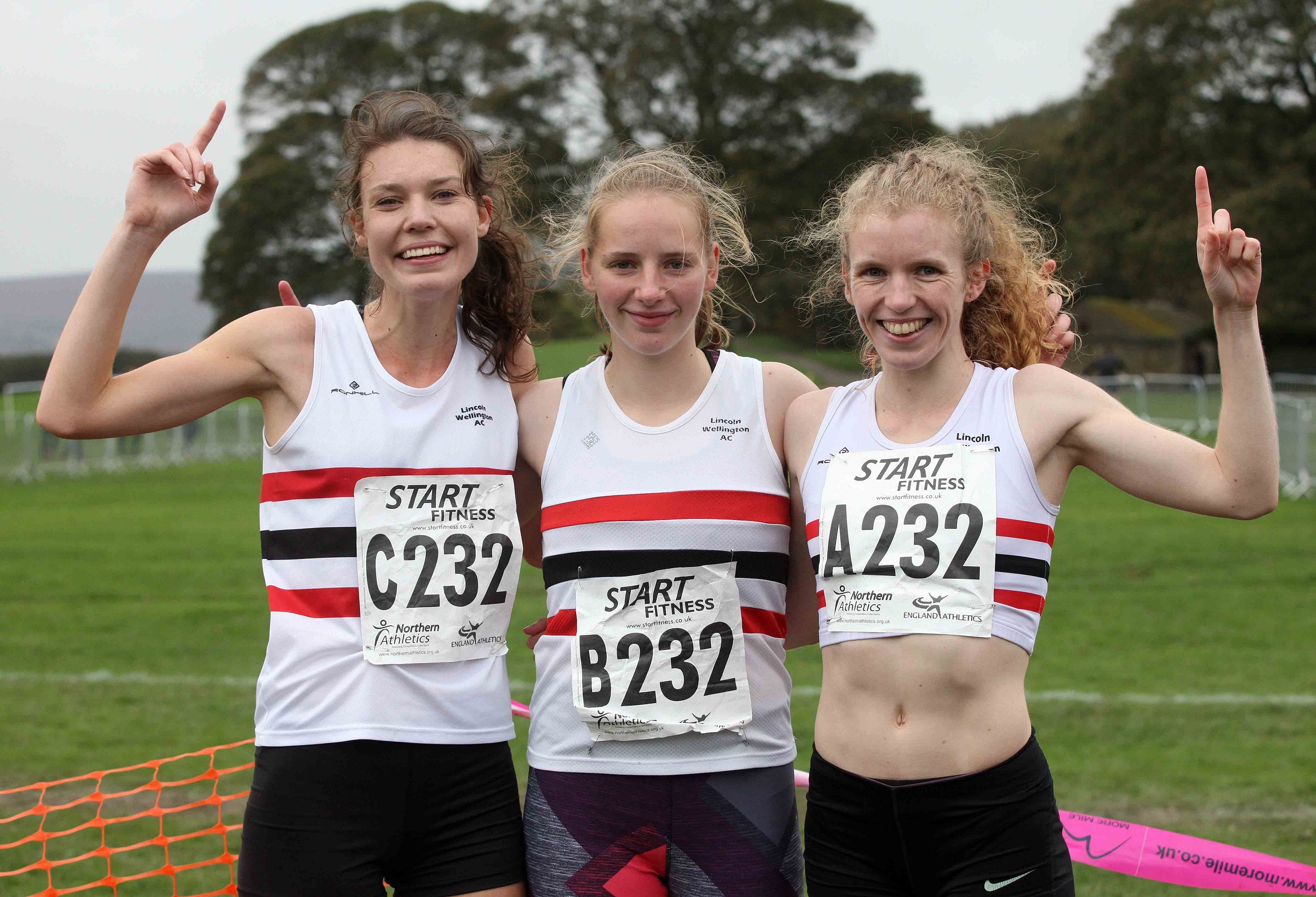 Lincoln Wellington were once again the top act as far as the senior competitions were concerned at the Northern Athletics Cross-Country Relay Championships held at a wind-swept Graves Park, Sheffield.
The men’s quartet of Joe Wilkinson, Tom Straw, Shane Robinson and Matt Bowser were defending the title the club won last year while the women’s trio of Rochelle Harrison, Gemma Holloway and Abbie Donnelly were going for a hat-trick of wins having claimed victories in 2015 and 2016.
Men’s Relay
The men’s team got off to the best possible start over four stages of two miles when Wilkinson came into the changeover area in first place 17 seconds clear of Sale’s Jamie Roden with Hallamshire (Tommy Horton) a further three seconds adrift in third place.
On leg two Straw consolidated pole position with the third fastest time of the stage behind Joe Steward (East Cheshire) and City of York’s Angus McMillan as Sale (Luke Betts) and Hallamshire (Cameron Bell) continued to be in a medal spot.
Going into the second half of the contest Robinson extended Lincoln’s advantage as Hallamshire (Joshua Taylor-Brown) moved into second place ahead of Sale (Joseph Viz) while Preston’s Nathan Dunn, with the fastest stage three time, moved up a couple of places into fifth, just 26 seconds adrift of a medal place.
On the glory leg Bowser had no problem consolidating Lincoln’s lead bringing his quartet home 46 seconds clear of the fast-finishing Preston (Patrick Dever) as Sale completed the podium places after getting the better of Hallamshire by eight seconds.
Women’s Relay 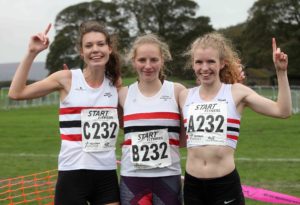 While Lincoln Wellington had a comfortable ride in their bid to retain their senior men’s title that certainly wasn’t the case for their women’s team. The title holders were back in 18th place at the end of the first leg (Rochelle Harrison) 1min 27sec behind Harriet Knowles-Jones whose 11:30 was the quickest of the day but unfortunately she had no Warrington team-mate to pass over to.
Sale (Francesca Brint) handed over in second place ahead of Leeds City’s Emma Clayton with Liverpool’s Rachel Burns in fourth and Morpeth’s Emma Holt fifth.
Things changed dramatically on the penultimate leg with Leeds City (Alice Leake) being first home two seconds ahead of Hallamshire (Zanthe Wray) who had moved up from seventh with Sale (Claudia Cowan) dropping back one place into third however, a lot of the action was happening behind the leading group as Birtley (Sophie Burnett, with the fastest stage time) moved up 10 places to sixth while Lincoln Wellington’s Holloway, with the second fastest stage time, moved through from 18th to seventh.
As the final leg unfolded the leading group bunched up and before half-way had been reached Birtley (Lydia Turner) were now in the ascendancy, albeit by a few metres ahead of Sale (Ellen Downs) and Hallamshire’s Charlotte Ward. However, just behind the leading trio was Lincoln’s Donnelly, who had been a member of the winning team for the past two years. Donnelly moved up into second place cutting into Turner’s advantage with every stride. Eventually, with around 600 metres to go to the finish, Donnelly moved onto Turner’s shoulder and though the move wasn’t decisive she eased ahead to come home for her Lincoln Wellington and her own third gold medal crossing the line a meagre two seconds ahead of Turner.
Sale finished a clear third though such is the strength of Lincoln Wellington at present, there B team moved through from 26th to 13th at the finish thanks to Rebekah Ward’s efforts.

Under 17s
THE under-17 men’s event opened the day’s proceedings and it was Middlesbrough AC (Mandale) who were celebrating at the end of the 3×2.3k contest thanks to the fastest time of the day by last leg runner Josh Cowperthwaite. The Teessiders were back in 12th place at the first changeover before Daniel Currie moved through to seventh to pass over to Cowperthwaite. Trafford (Xavier O’Hare) led on the first leg then it was Liverpool’s turn to lead at the completion of stage two but Cowperthwaite had the final say by storming home 10 seconds clear of Lincoln Wellington with Vale Royal completing the podium places.
Next up was the under-17 women’s three-stage relay over the same 3.2k course and this time it was Liverpool who had the advantage at the finish after Derby(Molly Hudson) led on the first leg. Derby (Jasmine Cooper) were still at the head of affairs at the final changeover albeit by just one second ahead of the Merseysiders. On the final stage Liverpool’s Ella McNiven eased away to cross the line a comfortable 23 seconds clear of Vale Royal’s Holly Smith as Rotherham (Mya Taylor) relegated Derby out of a podium place.

Under 11s
The under-11 3x1500m relays were next in action and the girls event was won by Stockport who finished 12 seconds ahead of Keighley and Craven with Salford a further 15 seconds back in third place. Freya Murdoch brought Stockport through from third to first on the final stage after posting the fastest time of the day.
The boys relay was won by Barnsley who had 20 seconds in hand at the finish over Rotherham with Wirral completing the one-two-three. Ben Nutter, with the day’s quickest time, moved Barnsley into the lead on stage two with Jonson Hughes extending the advantage on the glory leg.

Under 13 Girls
The under-13 girls and boys relay was over a distance of 1.8k and it was Hallamshire who came out on top in the girls event after leading throughout.
Vale Royal were always in second place with Holly Weedall posting the quickest time of the day. The bronze medals went to Birtley who came from ninth to third on the last leg thanks to Abigail Thwaites.
Derby were crowned the boys champions ahead of Sale and Stockport. Holmfirth led at the first changeover thanks to the fastest time of the day by Kristian Green. However, the team were subsequently disqualified – no club vest by second leg runner – after eventually finishing in fifth place.
Patrick Welsh eased Derby into the lead on stage two with Ben Stevenson adding precious seconds on the final leg to come home six seconds clear.
It was a sprint finish for second place with Sale (Harry Edmundson) getting the verdict over Stockport’s Jack Catterall by the thinness of margins.

Under 15s
The under-15 relays were over a course of 3.2k and it was Liverpool celebrating their second success of the day after winning the girls event while Hallamshire claimed the boys title. Liverpool were back in fifth place at the final changeover of the girls contest but, with the fastest time of the day, Caitlin Robinson cut back the deficit in fine style to bring the Merseysiders home in pole position.
City of Sheffield and Dearne, who held the lead over the first two stages, had to be content with the runners-up medals on this occasion as Houghton came through to take third place. Houghton also finished in third place in the boys relay with victory going to Hallamshire who had a 19-seconds cushion over second-placed Middlesbrough AC (Mandale). Fastest on the course was Leeds City’s Ethan Hussey who was first home on the opening stage and though the Yorkshire outfit were still in a medal position at the final changeover thanks to Sam Akerman, the blue and golds were without a third-leg runner.

Thanks must go to meeting manager Steve Gaines and his team for putting together another superb NA XC Relay Championships.   Results 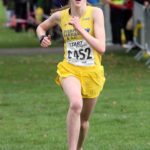 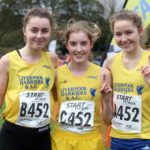 From left to right: Jessica Cook, Ella McNiven and Emma Gordon, Liverpool Harriers winners of the under-17 womens 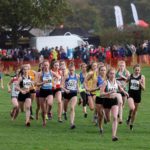 Start of the under-17 womens northern Cross Country Relays. 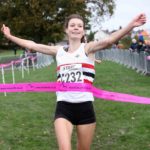 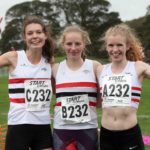 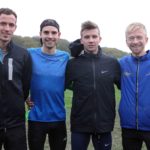 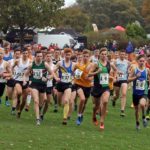 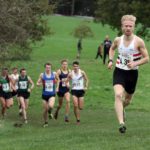 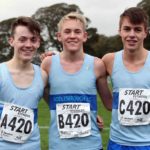 From left to right: Patrick Haycock, Daniel Currie and Josh Cowperthwaite, Middlesbrough AC winners of the under-17 mens 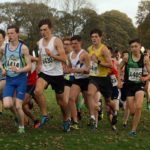 Start of the under-17 mens Northern Cross Country Relays. 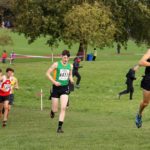 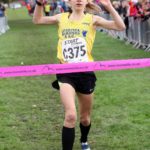 Liverpool Harriers come home to victory in the girls under-15s 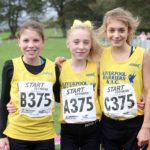 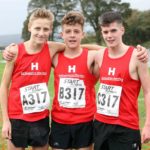 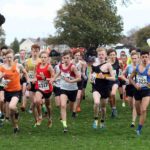 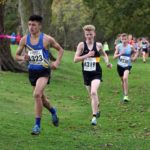